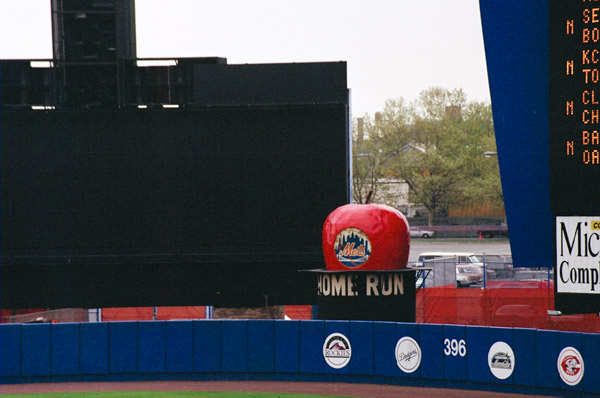 With Citi Field construction making progress towards Opening Day 2009, we turn our attention to a relatively small detail at the stadium - the Home Run Apple. There's a movement afoot at SaveTheApple.com to...save the apple as it currently exists at Shea Stadium. While the website points out that renderings of Citi Field show an apple behind the outfield walls, there is no word on whether the apple is the same as the existing Shea apple or a new Citi Field apple.

In a post from early today, SaveTheApple makes its case for the apple by pointing out that US Cellular Field has some of the original exploding pinwheels from old Comiskey Park. Fireworks from those pinwheels went off during a home run, much like the apple rises from its top hat (though Wikipedia says the "exploding scoreboard" is a replica. The current apple, which debuted in 1980, is about 9 feet wide, is made of plaster and weighs 582 pounds. The top hat it emerges from is constructed of plywood.

SaveTheApple also has an online petition, currently with 162 signatures, to Mets ownership. While the apple is certainly hokey, it's been with the Mets so long that we can't imagine a Mets home run without it. It's one of the few things from Shea that we wouldn't mind seeing making it over to Citi Field.

Update: Matt Cerrone over at MetsBlog sends us a link to their post in June that says the prospects for the Shea apple are grim. It may be replaced by a more elaborate apple with the current one auctioned off for charity.