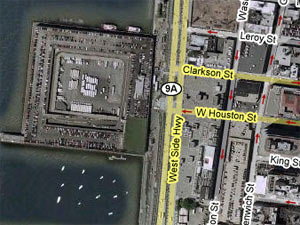 Yesterday, we noted that a body was found in the Hudson, off Houston and West Streets near Pier 40. It turns out that the body was of a Brooklyn man missing for a few days.

Michael Dukes' family had reported the 30-year-old missing last Wednesday, when he went to go to the store. Now the ME's office will determine the cause of death. And in a strange side story, it turns out that a 3-year-old and her friends were on a birthday cruise in the river and the kids saw the body because the boat was circling the corpse.

The birthday girl's father said, "At least 15 kids saw this. The kids were screaming, crying, 'Mommy! What's going on? What is that?' It was the cruise from hell. It was like out of a movie. You couldn't make this stuff up." And her mother added, "The adults were obviously curious to see the body floating because they couldn't really believe this was actually happening."