Miss NJ Learns the Dangers of the Internet 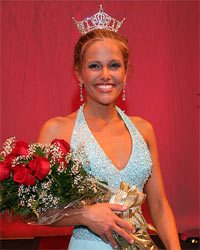 Oh, the dangers of the interwebs. Recently crowned Miss New Jersey Amy Polumbo held a press conference yesterday to announce that she was being blackmailed into stepping down after someone sent packages of photographs where she's in possibly compromising positions to her and pageant officials. The pictures had once been posted on Facebook.

Polumbo, who is a senior at Wagner College on Staten Island, said tearfully, "Being crowned Miss New Jersey was a dream come true, but that dream has turned into a nightmare. I'm a victim of blackmail and possible extortion... It would certainly be easier to succumb to immoral threats, but what would that say about me?" As it happens, Polumbo's pageant platform was to fight Internet predators.

It's unclear what the photographs reveal - some say she's fully clothed but engaged in horseplay. Her lawyer said, "I don't think the photos are that bad. The person who is threatening to expose the photographs apparently feels the pageant people might hold them to a different standard." while her mother said, "We think it was somebody inside the pageant." Dunh dunh dunh!

The NJ chapter of the Miss America organization is investigating the situation. And if they do decided to strip Polumbo of her Garden State tiara, Ronica Licciardello of Mount Laurel will become Miss New Jersey. Palumbo's predicament is reminiscent of another Jersey girl's troubles with racy Internet photos. Antonella Barba of Point Pleasant, NJ received unwanted attention earlier this year while, as a contestant on American Idol, revealing photos of her appeared on the Internet. We advise any future pageant participants (actually, this goes for everyone) to remember that while posting photographs on the Internet can be fun, it can also come back to haunt you. And we're hoping that this will not result in an additional sequel to the movie Miss Congeniality, with the FBI getting involved in a pageant-centered blackmail case.