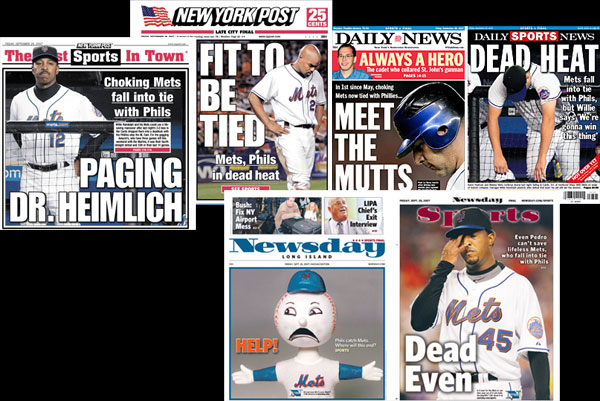 It took the Mets a little more than two weeks, but they've somehow managed to squander a seven-game lead in the National League East. Since September 12th, the lead has slowly gotten smaller and is now zero, zilch, zip, nadda, nil. With three games left in the regular season, the Mets are tied with the Phillies for first in the NL East. The last time the Mets weren't in sole possession of first place - May 15th! How did they get to where they are now? Starting on Sept. 14th, the Mets went 4-10, including a 5-game losing streak and a 4-game losing streak. It didn't help that the Phillies went on a tear during the same stretch of games, including a three-game sweep of the Mets.

While the Mets are tied for the NL East lead, they are in a 3-way tie with the Rockies and the Phillies for 2nd in the chase for the NL Wild Card. The Padres currently lead the Wild Card standings.

Although it may be too early to talk about the Mets and their tiebreaker situations (after all, they can't seem to win at all), here they are anyway:

But to get to any of those situations, it seems like the Mets would have to win first.

In an attempt to save their season, the Mets take on the Marlins for three games, starting tonight. If it's of any comfort for Mets fans, it should be noted that the team took 3 of 4 from the Marlins just last weekend. The Phillies face the Nationals at home for their final three games of the regular season, a team they just won 3 of 4 from as well.