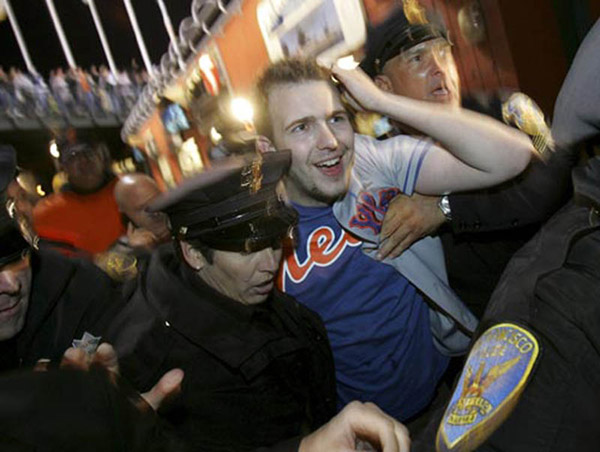 What are the chances? Matt Murphy, a Queens-native and Mets fan, was on his way to Australia when he bought a ticket to last night's Giants-Nationals game at AT&T Park in San Francisco for a chance to watch history. He didn't just watch history, he happened to catch it. Or grab it, at least. Murphy, wearing a Mets jersey and t-shirt, and a buddy (wearing Yankees gear) bought a pair of tickets from a scalper before yesterday's game while on their one-day layover to Australia. As an aside: we've never understood the allure of attending a game wearing apparel of a team that isn't actually playing in that game.

In the 5th inning Barry Bonds passed Hank Aaron's Major League home run record with a shot to right center, his 756th career home run. The 22 year-old Murphy came out of the pile bloodied, but with ball ball in hand. He high-fived fans and put the ball into his shorts before being escorted out by members of the San Francisco Police Department. Frankly, we're surprised people didn't rip his shorts off for the ball.

With all the rumors of steroid use around Bonds, a lot is being said, but like how George Vecsey put it in his Times select article today:

Nobody — and certainly not some chemist in a white smock — swung the bat for Bonds against objects moving 80 or 90 or 100 miles an hour. He had to do that himself, with the superb reflexes he had as a cocky stripling, and the craft he acquired as a smug and enlarged elder.

No matter what anybody thinks about Bonds as a person, he walked out to home plate with a bat in his hand and some new-wave padding on his arms, and goodness knows what in his system, and he propelled baseballs into the briny deep.

Besides, you can always buy this t-shirt.