Mets are Favorites, but Nothing is Guaranteed 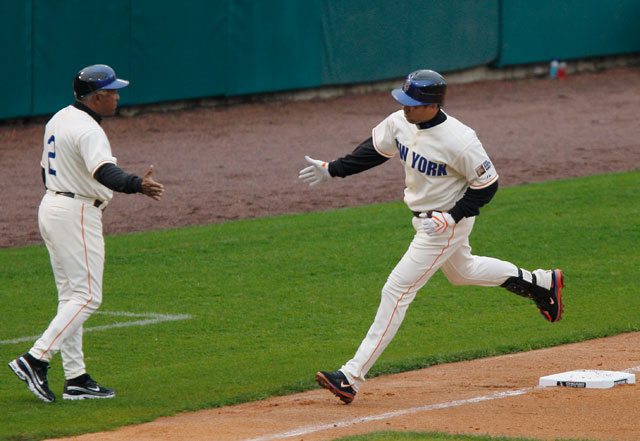 Few players can catapult a team from worriers to prohibitive favorites, but Johan Santana can put his name on that list. Before the Mets got him, they and their fans were looking over their shoulders to the Phillies and Braves. Now the team is almost overloaded with optimism.

That hope -- or expectations, depending on whom you ask -- is well-founded. With Santana, Pedro Martinez, Oliver Perez and John Maine as their top four starters, the Mets have as good a rotation as any team in the league assuming Perez keeps his control and Maine improves his stamina. Billy Wagner is still an excellent closer, and Aaron Heilman and Pedro Feliciano are more than capable setup men. The trio of Carlos Beltran, David Wright and Jose Reyes is also a top offensive combination. Even if the Mets filled in retreads or other such riffraff behind those pitchers, they would still be in a good situation. The Phillies and some shaky pitching don't appear primed to reprise their division win of 2007.

That's good, because the rest of the roster isn't all that good. Moises Alou is a fine player when healthy, but he's already going to start the season on the DL. Carlos Delgado stunk last season. Brian Schneider and Ryan Church aren't going to make anyone feel better about giving up Lastings Milledge. The bottom half of the order leaves much to be desired. General manager Omar Minaya is great at throwing money at elite players, but he is equally poor at the periphery of his roster. This team is still equipped to get to the playoffs, but the attention to detail just isn't there.

Once in the playoffs, the Mets' season will turn mostly on luck. No matter how good they are, nothing is guaranteed in a best-of-five or best-of-seven series. The National League doesn't compare to the American, but teams like the Diamondbacks, Dodgers, Rockies, Cubs could all upend the Mets. Being the best team doesn't guarantee a win in the postseason. In short, the Mets should enjoy their regular season if none of their stars gets hurt, but they'll be plenty nervous come October.