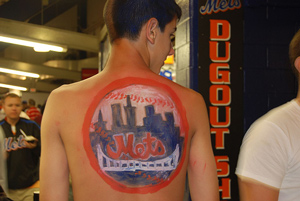 A few months ago, a more unlikely scenario could not be imagined. The Yankees are barreling into the playoffs after recovering from one of the team's worst season starts in franchise history. The Mets, on the other hand, are staggering towards the end of the season having lost five straight and 11 of their last 15 games. A seemingly insurmountable lead in their division has been whittled to second place behind the Phillies, and the Mets have let a playoffs appearance escape from their control. Last night's game was almost emblematic of the horror show that has aired early before Halloween. Superstar David Wright couldn't locate third base for a force out. Faced with loaded bases, pitcher Oliver Perez hit two batters with errant throws.

The usually unforgiving NYC media seems to be having as much trouble dealing with the end-of-season collapse as the team. The New York Post consulted mental health professionals, who are counseling fans that this is not the end of the world, even if it may be the end of the season. The Staten Island Advance got in touch with a psychic, who did not allow his total lack of baseball knowledge prevent him from foreseeing that the Mets were finished. The Staten Island psychic also noted that he predicted this Mets disintegration back in June and that if the Yanks fire Joe Torre, the Queens club will hire him.

New York fans should not despair. The Mets are leading the Marlins this afternoon 8-0, by out-hitting Florida 11-0 through the third inning. The Phillies game against the Washington Nationals begins at 3:55 p.m. Stay tuned.

UPDATE: A bench-clearing altercation got some players ejected from the game during the 5th inning, but John Maine has struck out 12 batters through six innings and the Mets lead 10-0 heading into the bottom of the 6th.
(Untitled image of a painted Mets fan, by La Mariposa at flickr)