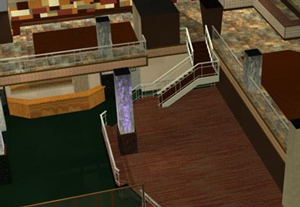 The woes of the downtown club scene continue to follow, even as the clubs themselves migrate eastward. Last night a 25-year-old man was stabbed to death outside of the Flatiron District club Strata. The man was stabbed in the torso and taken to St. Vincent's Hospital where he died from his injuries. Strata is a multi-level dance club at Broadway and 21st St. The name of the victim was not disclosed to reporters because his family had not been notified of his death. Police took one person into custody for questioning, although it was unclear whether the individual was a witness to the stabbing or a suspect.

Clubs began leaving West Chelsea earlier this year as cops began cracking down on the drunken crowds that frequent the establishments and are easy prey for criminals. 18-year-old Jennifer Moore was kidnapped, raped, and murdered after a night out partying at Guest House on the west side last summer. That murder was reminiscent of the killing of Immette St. Guillen, who was abducted and killed a few months earlier, allegedly by the bouncer at a now-closed bar in Soho.

(Image of Strata's floorplan from the club's site)