Last Night's Action: Is Beltran Back? 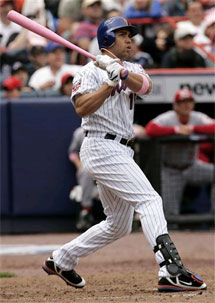 Mets 8, Reds 3: Carlos Beltran and Ryan Church homered back-to-back, the Mets roughed up Johnny Cueto and Oliver Perez waited until the sixth inning to melt down in a win of a rubber game at Shea Stadium. Jose Reyes got it all started with a single and a stolen base before Luis Castillo tripled him home.

Beltran, whose homer preceded Church's in the fifth, had an RBI double in the first. The revival of the offense is due in large part to his contributions. Working with a lead for once, Perez had a walk and a wild pitch in the sixth but still looked much better than he has in quite some time.

As for Castillo, the joy brought by his triple got canceled out by his needing to leave the game with quadriceps soreness. That's the latest in a ever-growing series of durability problems. His line this year, in average/on-base percentage/slugging percentage: .245/.355/.292 -- and that slugging is with Sunday's triple. Reds second baseman Jeff Keppinger, traded for since-released Ruben Gotay in 2006, is at .324/.370/.430. Castillo makes $6 million. Keppinger will get $400,000.

Photograph of Carlos Beltran hitting a two-run home run in the fifth inning by Ed Betz; pink baseball bats were used all around the league yesterday to promote Breast Cancer Awareness