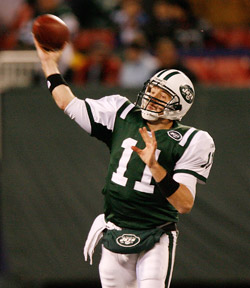 Remember how excited some people got when Roger Clemens announced he was coming back to the Yankees? New Jets starting quarterback Kellen Clemens -- no relation, but like Roger's kids, his name does start with "K" -- won't get as much attention, but he still has quite a following. Weeks of calls for Chad Pennington to sit in favor of Clemens didn't persuade Coach Eric Mangini, but a 1-7 start has been enough for him to pull the plug on Pennington. Jets fans shouldn't expect greatness, but at least the second half of this season can now amount to something productive.

As for Sunday, the Redskins bring a talented team the Meadowlands. Before last week's pasting by the Patriots, their defense looked like a solid unit. Guard Pete Kendall probably isn't disappointed he was traded during training camp.The receivers storyline received a blow because Laveranues Coles, for the first time in a long time, probably won't play with a concussion. That leaves Washington's Santana Moss to face his former team without Coles as a counterpart in that role. That also costs Clemens his most valuable target. Unless he can rally the troops, Washington should take care of this one before everyone watches Patriots-Colts.