Karl Rove Will Resign at End of Month 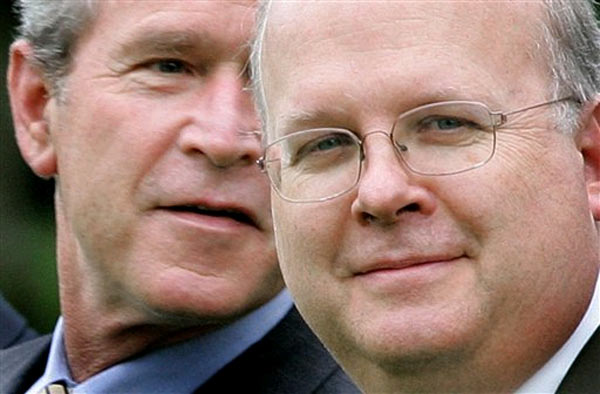 Karl Rove, the political mastermind who maneuvered George W. Bush to the White house twice, will be stepping down from his role as President Bush's political adviser at the end of the month. In an interview with the Wall Street Journal, Rove explained, "I just think it's time. There's always something that can keep you here, and as much as I'd like to be here, I've got to do this for the sake of my family." Rove will be returning to Texas and stay out of politics -for now.

In his WSJ interview, he makes some predictions: The Democrats' 2008 presidential nomination will go to Senator Hillary Clinton ("tough, tenacious, fatally flawed candidate") but makes no predictions about the Republican nomination. From the WSJ:

Mr. Rove also said he expects the president's approval rating to rise again, and that conditions in Iraq will improve as the U.S. military surge continues. He said he expects Democrats to be divided this fall in the battle over warrantless wiretapping, while the budget battle -- and a series of presidential vetoes -- should help Republicans gain an edge on spending restraint and taxes.

What's interesting is that Rove first considered leaving a year ago, but stayed because of the GOP's losses during the midterm elections. However, as the NY Times reports, expectation that senior White House aides that stayed through Labor Day "would...stay through the rest" of the Bush presidency "forced" Rove's hand.

The Washington Post notes that while many high-profile presidential aides have resigned recently, "None came close to Rove's stature or influence, however. His departure is the end of an era in modern GOP politics, the conclusion of 14 years that began with advising the son of the last Republican to hold the White House, then guiding that son first to the Texas governor's mansion and, ultimately, to the White House. Along the way, Rove became the most prominent political strategist of his generation and a bete noire for liberals and even a number of conservative critics".

Related: Here's commentary from the WSJ's Paul Gigot, who interviewed Rove, analysis from Politico ("He can claim credit for political victories of historic proportions, but also stands accused of policy failures and a strategy of divisiveness."), and this 2005 NY Times editorial about his possible role in the Plame leak ("While we like government officials who are willing to whisper vital information, we like even more government officials who tell the truth in public.").

Photograph of Bush and Rove by Ron Edmonds/AP