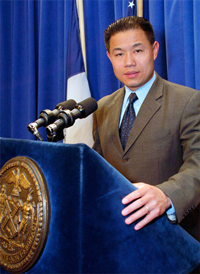 A federal judge dismissed defamation charges against City Councilman John Liu related to an incident last year when Liu called radio personality DJ Star a "sick, racist pedophile." The characterization was a reaction to an on-air taunt at a rival DJ, when DJ Star (Troi Torain), solicited information on where DJ Envy of Hot 97 lived so he could sexually defile his four-year-old daughter. DJ Star also called DJ Envy's wife, who is Asian, several racist epithets. Torain was arrested following the incident and eventually fired from Power 105.

Torain sued Councilman Liu for $55 million in the aftermath of the incident, alleging that the Queens pol had damaged his reputation. Liu also said that Torain should be "terminated from the face of the earth." A judge ruled Friday, however, that "most people would not take the Queens Democrat's words at face value." We're sure that ruling is of some interest to Viola Plummer, the former chief of staff of Councilman Charles Barron. Plummer is suing Council Speaker Christine Quinn after being fired in the wake of an incident where Plummer pledged to assasinate council member Leroy Comrie, although she insists that the threat was figurative.