Joe Torre Will Not Return to the Yankees in '08 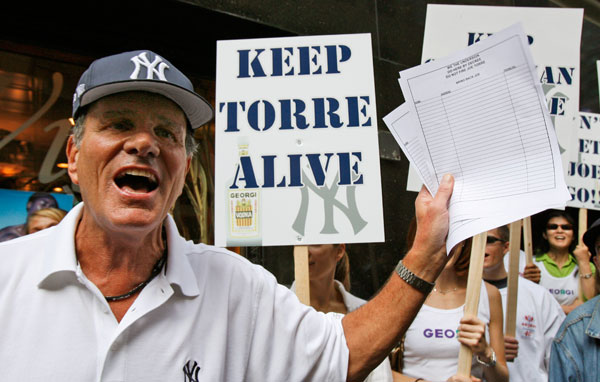 In what can only be described as a shock, Joe Torre has decided not to return to the Bronx in 2008.

Joe Torre is currently on a plane back to New York, so we probably won't know why he made this decision until tomorrow. Maybe it was that he was tired of all the "stuff" that goes along with the job, maybe he was too proud to take a pay cut, even one that would have still left him the highest-paid manager in the game. Whatever the reason, this is a sad day for the Yankees and they will now scramble to find a new manager to replace the man who amassed 1173 wins, 4 world series titles, 9 straight AL East titles and 12 post-season appearances. And, the new manager will have to be someone who will help convince veterans like Posada and Rivera to return to the Bronx in 2008. Perhaps it will be Don Mattingly, perhaps someone else, but Joe Torre's tenure in New York is officially over.

Yankees president Randy Levine told reporters, "Joe Torre turned that offer down today. We respect his decision. We respect everything he has done but it is now time to move forward... The goal of this franchise is to win the World Series. All of us get up everyday knowing that that is the goal. Unfortunately we have not met that goal for seven years. It's nobody's fault. All of us are in it together. All of us are responsible." He also added, "Joe Torre is a legendary Yankees manager."

Photo of Yankees fans protesting on Wednesday by AP/Kathy Willens