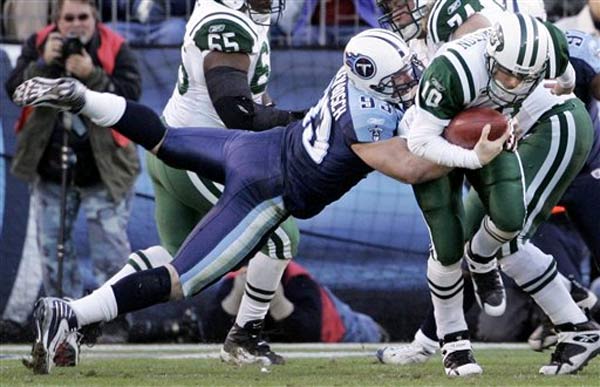 Eight of the Jets' 12 losses have come by seven points or fewer. Too many of them have followed the script of Sunday's 10-6 defeat at the hands of the Tennessee Titans in Nashville. Jets fans have to be sick of a banged-up team not expressing confidence in its quarterback -- Chad Pennington wasn't named the starter but played over Kellen Clemens and his sore ribs -- and then going out there and laying an offensive egg. Without his most dynamic playmaker (Laveranues Coles is on injured reserve), Pennington still found a way to complete 81 percent of his passes and throw for 264 yards.

Too bad two of his incompletions were interceptions, and only Jerricho Cotchery could threaten the Titans defense. Mike Nugent and his missed point-after following the only Jets touchdown -- to Cotchery, of course -- further hurt the cause.

The Jets can't be blamed if their minds are elsewhere. The Titans took the field knowing two wins in their final two games would put them in the playoffs, and, although they didn't dominate, they still had more reason to be up for this game than the Jets. New York faces former coach Herm Edwards and the Kansas City Chiefs next Sunday to close out their season.