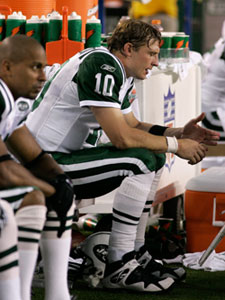 Chad Pennington gets all the attention, but the Jets' problems run deeper than the quarterback position. Eric Mangini said as much during an unusually open news conference following the latest Jets debacle, a 38-31 loss at Cincinnati on Sunday. Pennington looked fine in the first half, throwing two touchdowns to Lavaranues Coles. In the second half, the rest of the team's wheels fell off at once. Kenny Watson tore up the Jets' rush defense. When the Bengals did go to the air, Darrelle Revis, the rookie cornerback and a No. 1 draft pick, got called for two pass interference penalties. Nick Manigold, the center, botched a snap. On the last meaningful series, Pennington had an interception returned for a touchdown.

After the game, Mangini wouldn't commit to Pennington as next week's starter. That quarterback controversy is about the only interesting story following the Jets these days. Given the crummy nature of the Bengals defense, Mangini shouldn't be too impressed with Pennington's afternoon. Few expected the Jets to look so listless through seven games, even with their tough schedule. The last time the Jets sunk to 1-6, they rebounded to finish 8-8 under Bill Parcells. Up next: A Bills team that has already beaten the Jets once, pushed Dallas to the limit and comes off a win against Baltimore. They're enjoying success with a Pac-10 product in Trent Edwards (Stanford). Maybe the Jets will follow suit and toss Oregon Duck Kellen Clemens to the wolves.