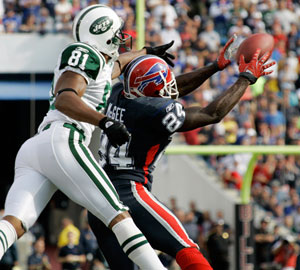 So much for taking advantage of an easy schedule. The Jets were handed a rookie quarterback, a banged up defense and an 0-3 opponent. They took one look at the pile under the Christmas tree, rewrapped the presents and gave them right back. But not before adding a bow to each of them. They now sit at 1-3 instead of 2-2. The season lost a lot of promise Sunday.

How could the Jets allow Trent Edwards to look so comfortable. They could live with Marshawn Lynch making plays, but Edwards was a rookie facing a defensive mastermind in Eric Mangini? Instead, the Stanford product looked like a veteran in a controlled game plan. If the Jets had forced him to throw more than one interception, things could have turned out differently, but no one seemed in a mood to make plays.

That apparent allergy to productivity extended to the offense. Chad Pennington helps when a team is in front and needs someone to manage a lead. When it comes time to striking quickly and playing from behind, he comes up short. Games like these make Jets fans clamor for Kellen Clemens, the man with a bigger upside and a stronger arm. With the suddenly resurgent Giants next on the schedule, the Jets need a jolt of energy or could look at a long season.