Jets Can't Get Out of Own Way 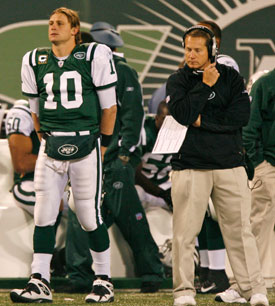 What better symbol for the Jets' season than cornerback's Darrelle Revis' collision with safety Abram Elam? Revis, going for an interception against Buffalo's Lee Evans, instead got a mouthful of his teammate and a great view at the Bills receiver's march to the end zone. That score clinched Buffalo's 13-3 win in the Meadowlands on Sunday. The Jets have now lost twice to the Bills and have fallen to 1-7. Their only win came against the Dolphins, but the NFL will still insist that it counts.

Has there been a bigger disappointment in the league this year? That's one of the few meaningful questions that can be asked of this team. The Jets can officially be eliminated from AFC East title contention if the 8-0 Patriots win at Indianapolis this Sunday and the Jets lose at home to Washington. The time has long passed for Chad Pennington to be replaced as quarterback. Shaun Ellis called this the worst stretch of his career. Eric Mangini said it was a different movie but the same ending. The magic dust he sprinkled last year is nowhere to be found. Jets fans can now debate whether it's better to improve the team's draft position -- by losing more games, of course -- or try to build something for next year. Right now, the second option seems more like a cruel joke than a realistic possibility.

Photo of Chad Pennington and Eric Mangini by AP/Kathy Willens

#AFC East
#chad pennington
#darrelle revis
#Eric Mangini
#football
#games
#jets
#Kathy Willens
#nfl
#patriots
#safety
#shaun ellis
#sports
#The Jets
#washington
Do you know the scoop? Comment below or Send us a Tip
A new Gothamist is coming! We’ve moved comments over to our beta site. Click here to join the conversation and get a preview of our new website.