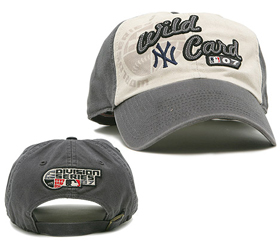 We understand the desire to milk every last dollar out of sports fans, but we have to say, the "Wild Card collection" is ridiculously bizarre. The Sports Hernia Blog pointed out the Yankees Wild Card hat and some reactions to it:

"If I see one person wearing that hat, they will get a swift donkey punch. I will take their hat, light it on fire and then shove it up there f**king nose." -- Brian, 30, passionate Yankee fan

"I heard they're coming out with a whole line of these hats that say 'Designated Hitter,' 'Trading Deadline, and '1-Game Playoff.'" -- Noonan, Sports Hernia staff

"While receiving my wild card hat, I had to sign for the delivery and when I attempted to do so, all ten of my fingers immediately cracked and became dislocated, and a tendon in my elbow ruptured. I have not seen the hat yet, but the Yankee fans should know I'll be back and better than, well, just better."
-- Carl Pavano

The NY Times' Tyler Kepner offered some extra quotes from Alex Rodriguez that didn't make it into a Times article. When asked if the media "puts unfair expectations" on him, he replied, "I mean, look, New York is very simple. You play well, they’re going to be happy. You don’t play well, they’re going to be not as happy. But you know what you get in New York. You’ve got to love it. That’s why I’m here."

#alex rodriguez
#baseball
#blogs
#Carl Pavano
#fire
#If I
#love
#media
#new york
#NL Wild Card
#ny times
#Rockies
#sports
#The NY
#the ny times
#wild
#wild card
#Yankees
Do you know the scoop? Comment below or Send us a Tip
A new Gothamist is coming! We’ve moved comments over to our beta site. Click here to join the conversation and get a preview of our new website.