Guess Who's Coming To Dinner 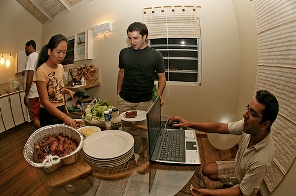 The laptop as guest - and sometimes the centerpiece - at dinner parties gets the Observer treatment today. We're all too familiar with friends staring at their Blackberry/iPhone/ Sidekick devices during social situations, but some might tell those toting a Macbook to a dinner party to just stay at home...or not? After all, they do come in handy when a debate is being settled (say, how many degrees of Kevin Bacon is Alan Thicke?). As long as everyone can get back in to real person-on-person conversation and re-enter the real world, the temporary tech guest shouldn't be too imposing.

The reality is that laptops are the new television, and just as TV-watching and dinner didn't mix at first way back when, soon enough the TV dinner was invented. We'd have to agree that while it's nice to have access to the internet for a debate, sitting around staring at YouTube videos definitely takes away from authentic conversation. The Observer breaks it down thusly:

And yet surely when the laptop comes to dinner, a certain sociability quotient is lost. Like the great democratic equalizer it is, the Internet ensures that you, the party guest, don’t actually have to be funny, you just have to have seen something funny. That you are merely the vehicle for this humor matters little, because the end result is the same: Everyone laughs! As a dinner guest, the laptop is very gracious about deflecting credit onto the person who invited it to the table. Which is, perhaps, why it keeps getting invited back.

The experts (on manners) seem to have a compromise. Thomas P. Farley, editor of Town & Country magazine’s anthology Modern Manners: The Thinking Person’s Guide to Social Graces, tells the Observer that while one shouldn't get out the laptop to show the latest viral video, that “people should feel free to describe what they saw on YouTube. Put it into words" (ie: "Well you see there's this chipmunk...wait no it's a prairie dog, and it's just sort of...being dramatic.")

So where do you stand...are there boundaries for where you log on and off?

Photo titled Ribs and a Laptop via Antiguan's Flickr.

#As
#flickr
#friends
#get out
#humor
#internet
#iphone
#kevin bacon
#people
#photos
#poll
#polls
#real world
#Take Our Poll
#technology
#television
#the observer
#tv
#video
#viral video
#youtube
Do you know the scoop? Comment below or Send us a Tip
A new Gothamist is coming! We’ve moved comments over to our beta site. Click here to join the conversation and get a preview of our new website.