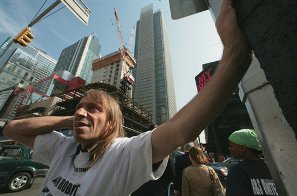 A week ago, Alain Robert scaled the New York Times Building to make a statement about the lack of government action on environmental issues (here's his website). Naturally, a stunt like that got Robert arrested, but a grand jury has dismissed the misdemeanor charges of trespassing, graffiti, reckless endangerment and disorderly conduct.

According to Robert's lawyer Daniel N. Arshack, who said jurors listened to Robert's explanation of how the climb was safe, two other charges of disorderly conduct remain, but they are not criminal charges but violations (like a parking ticket). It was also pointed out that the NY Times building's owners made no effort to "to prohibit entrance upon the exterior of the building, like a fence or enclosure" so there was no real trespassing. Well, the NY Times building does look like a huge ladder...

Robert said, "I have been charged with only disorderly conduct, but inaction on global warming by world leaders is true criminal behavior. Next month the G8 must act! World leaders need to enact an international agreement to cut greenhouse gas emissions by at LEAST 50%." And the other man who climbed the building, Renaldo Clarke, is scheduled to be in court later this summer.

Photograph of Alain Robert, with NY Times building it the background, by Bebeto Matthews/AP

#Alain Robert
#environment
#grand jury
#ny times building
#Renaldo Clarke
#scaling buildings
Do you know the scoop? Comment below or Send us a Tip
A new Gothamist is coming! We’ve moved comments over to our beta site. Click here to join the conversation and get a preview of our new website.