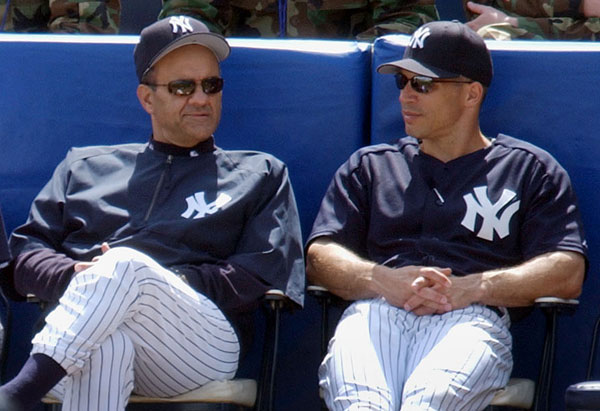 Stating that “this is about being a New York Yankee again today,” and proclaiming, “I expect to be in the Fall Classic next October,” Joe Girardi met the media as the next manager of the New York Yankees today. Girardi sought to differentiate himself from his predecessor saying, “I am going to be myself. There are expectations on me and my coaching staff, the same that were on Joe Torre when he came in in 1996….I can’t be Joe Torre, I’m made up different.”

While Girardi is officially the manager, it sounds like Joe Torre will be managing in 2008 as well...in Los Angeles. Torre appeared on Letterman last night and when asked about the job would only say, "There has been a time or two when something that's been in the newspaper hasn't been true. There is nothing to any of it, so far." Stay tuned on this one.

Meanwhile, Don Mattingly, who might join Torre in LA, called Joe Girardi and congratulated him, but also said that “this decision that they (the Yankees) made really frees me up to feel like I should have the freedom to go work in any situation that may come up.” Mattingly stated that he had never been guaranteed the job of next Yankees manager but clearly felt he was still qualified to manage, “In no shape or any way has this deterred me in my thinking.” And he didn't show any bad feelings towards the Yankees saying, "I am not going to start rooting for the Red Sox...I consider myself a New Yorker."

And, while the Yankees are negotiating with Mariano in Tampa and Rudy Guiliani is back to being a Yankees’ fan (he said he was rooting for the Red Sox), there's at least one group that doesn’t hate A-Rod.

Photo of Joe Torre and Joe Girardi in March, 2005 by AP/Tony Gutierrez