Giants Survive Their Trip To London 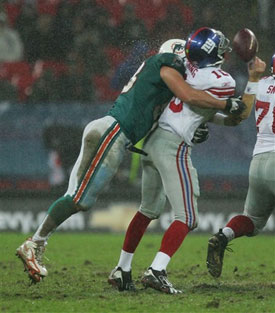 The Giants escaped London with an ugly 13-10 win on an ugly day on an ugly field. The Wembley Stadium turf was not made to handle our brand of football in the rain and it rapidly turned into mud, leaving the players struggling for footing and resulting in sloppy play on both sides of the ball.

The Giants took an early lead, after Jay Feely missed a field goal, driving 59 yards for a field goal. New York then a 14-play/69yard drive midway through the second quarter that culminated in a 10-yard run for a touchdown by Eli Manning. With a wet field and less than a minute in the half, Miami foolishly tried to drive the ball and turned it over, setting up a Giants’ field goal to make it 13-0.

The second half was a simply hideous display of football. Players slipped all over the field and sloppy play ruled the day. The Dolphins drove for a field goal at the end of the third quarter and the Giants should have answered, but Lawrence Tynes missed a 29-yard attempt. Both teams exchanged punts before Miami drove the field and scored a touchdown with just under two minutes left in the game. But, with no timeouts, they had to try the onside kick and Jay Feely pushed the ball straight out of bounds on the wet turf. All that was left was for the Giants to take a knee which they did to a cacophony of boos from the remaining crowd.

Despite the poor weather and poor play, the reviews of the game were generally positive. The NFL would like to play two games a year outside of the US and there is talk of expanding the regular season to 18 games as well. Jerry Jones may not like it, but it looks like Sunday was the start of something bigger for the league.