Giants Pound Their Way to 5-2 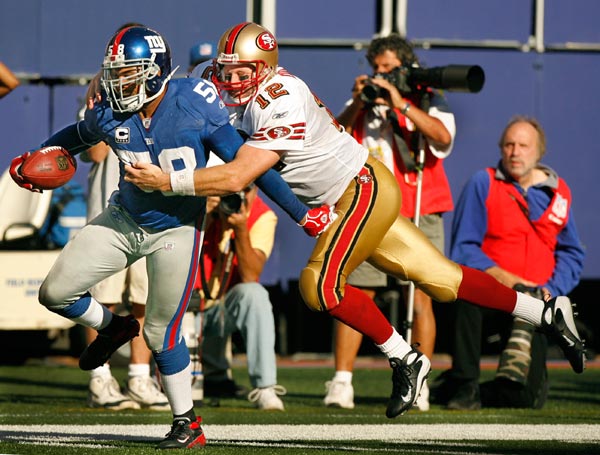 In a 33-15 game, it is cliché to say that it was closer than the final score, but this game really was. It is even more cliché to say that this game turned on only a few plays, but again, it did. The fact is, San Francisco’s inability to hold onto the football was the key difference in the game.

Things looked great for the Giants at the start, taking the opening kickoff and driving 83 yards for a touchdown. They missed the extra point, but they quickly forced the 49ers to punt and started another huge drive deep into 49ers’ territory, only to turn the ball over on an interception. San Francisco subsequently scored a touchdown and when they forced the Giants to go three and out, the momentum had changed to their side.

But, just as quickly it changed back. Trent Dilfer fumbled away the first snap of the series and Osi Umenyiora recovered. Four plays later, the Giants scored on a Brandon Jacobs run. San Francisco got the ball back but Dilfer threw an interception and the Giants scored a field goal and added another one before the half to make it 19-7. The 49ers had one last chance to get into the game when a roughing the passer call on Aaron Pierce extended a drive, but Osi Umenyiora caused, recovered and ran-back a fumble to make it 26-7 and send the Giants off to London at 5-2.