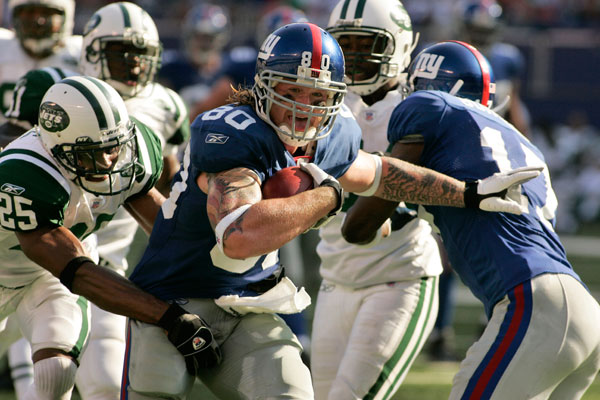 It was a tale of two halves at the Meadowlands on Sunday. In the first half, the Giants did everything they could to hand a game to the Jets, in the second half, they woke up and took control of the game.

Kerry Rhodes returned a Brandon Jacobs fumble for a touchdown to get the scoring started for the Jets and after the teams traded touchdowns, Eli Manning threw an awful interception in the waning moments of the second quarter to allow the Jets a field goal and put them up 17-7 at the half.

But, the one area the Giants were succeeding in was controlling the line of scrimmage and in the second half they exploited that to their advantage. They kept running the ball and Jacobs and Ward combined for over 150 yards on the ground. With the score 24-14 late in the third quarter, Eli Manning hooked up with Jeremy Shockey for a Giants touchdown. On the ensuing possession the Jets had a nice drive going, getting first down at the Giants' 23-yard line, but Chad Pennington inexplicably threw an awful interception to Aaron Ross. The Giants took the ball and Plaxico Burress humiliated Andre Dyson along the sideline for a 53-yard touchdown. The teams then exchanged punts before Aaron Ross returned his second interception of the day for a touchdown, icing the game and giving the Giants a 35-24 victory

Now the Giants are 3-2 and with games upcoming against Atlanta, San Francisco and Miami, a 6-2 record at the halfway point is a definite possibility. The 1-4 Jets will play at home for real next week against the Eagles.