George Is Getting Upset! 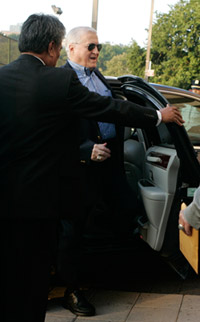 The reports of George Steinbrenner’s demise may have been exaggerated. In an interview with Ian O'Connor, Steinbrenner showed the fire that longtime fans of the Yankees are used to. While it wasn’t punching out someone in an elevator, this was a classic motivational ploy from the Steinbrenner textbook - win or the manager is gone.

Of course all of this ignores the fact that the Yankees are lucky to have even made the playoffs. Teams that start 21-29 and are still under .500 on the 4th of July usually don’t play in October. But, this year’s team recovered from a disastrous start and a lot of the credit has to go to Joe Torre. Yes, Torre will never be considered a brilliant tactician and his handling of the bullpen can drive you nuts, but there is nobody better at handling New York. Torre is from New York, Steinbrenner just pretends to be. He managed and played for the Mets and he understands all the distractions that the city creates.

And, it’s not as if there are a ton of great managers looking for jobs. Don Mattingly has never managed on any level, why would he be better than Torre? Joe Girardi did a nice job in Florida, but he also burned out the arms of several young pitchers. Is that who you want handling Phil Hughes and Joba Chamberlain next year? Tony LaRussa may be unemployed soon, but does he have the temperament for this job?

But that’s not the way George’s mind works. He wants another ring and there will be severe consequences unless he gets it. It is that type of thinking that plunged the organization into mediocrity in the 80’s and early 90’s, a period they only recovered from when Steinbrenner was banished from baseball and Gene Michael rebuilt the farm system. Brian Cashman has started to repeat that process and leaving him and Joe Torre alone would be the prudent move. This season may not end with a parade, but the Yankees are a better team with Joe managing and the four championships he has already won should provide him with a lifetime of job security.