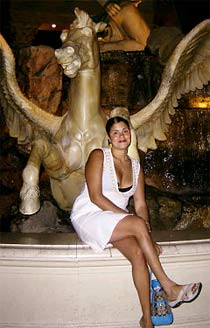 A Queens native who once made $500,000 as a New York City lawyer is now suing a number of Atlantic City casinos for $20 million, claiming they didn't notice her gambling addiction. Arelia Margarita Taveras owes $1 million from her gambling losses, but thinks the casinos enabled her.

Taveras, who represented victims' families in the World Trade Center attacks and Flight 587 crash, grew up in Corona, went to Cardozo Law School, and was, at the height of her success, making $500,000/year at her practice of 400 clients. She also appeared as a TV commentator and was named one of the "21 New Yorkers to Watch in the 21st Century" by the Daily News in 2000. But Taveras says her troubles began when she went to Atlantic City to relax.

"They knew I was going for days without eating or sleeping. I would pass out at the tables. They had a duty of care to me. Nobody in their right mind would gamble for four or five straight days without sleeping," Taveras told the AP. She says the casinos welcomed her with "high roller" perks, like allowing her bring her dog to blackjack tables and a limo to take her between casinos.

A lawyer specializing in Atlantic City gambling issues, Paul O'Gara, said Taveras' case is hard to prove, "How are you supposed to know whether this was a woman who was just having a good time, or had money and was just lonely, as opposed to someone who couldn't control themselves?"

Taveras, who used $100,000 of clients' escrow money to cover her losses and was charged with grand larceny and forgery by the Queens DA's office, was disbarred, lost her apartment and parents' home, and now works at a call center in Minnesota. She told the AP, "It's like crack, only gambling is worse than crack because it's mental. It creeps up on you, the impulse. It's a sickness."

#Arelia Taveras
#Atlantic City
#casinos
#gambling addiction
#lawsuit
Do you know the scoop? Comment below or Send us a Tip