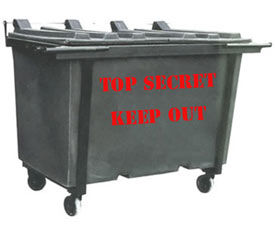 The New York Post continues its saga of poor document management by the Port Authority today, after exposing how a homeless man found confidential building plans for the Freedom Tower in a trash bin last week. The paper was contacted by a pair of "salvage experts" in the wake of that story, who wanted to let it know that they had reams of documents--all marked confidential--that they discovered in a dumpster behind 115 Broadway, where the Port Authority has rented space for project engineers.

In all, the boxes of papers and rolls of blueprints weigh about 300 pounds.

Among the documents were blueprints for building 4 WTC and the temporary PATH station, preliminary plans for the police headquarters, and a detailed construction plan for building 7.

A Port Authority spokesperson said that with a $16 billion construction project, lots of documents are going to be produced and discarded and that there are strict protocols in place for disposing of confidential material. Those strict protocols will surely be reiterated to everyone involved with the WTC tomorrow morning.

#confidential
#documents
#homeless
#plans
#port authority
#salvage
#trash
#wtc
Do you know the scoop? Comment below or Send us a Tip
A new Gothamist is coming! We’ve moved comments over to our beta site. Click here to join the conversation and get a preview of our new website.