Sure, the Caribbean is closer and Hawai’i is more tourist-friendly. But for adventurous, independent travelers, American Samoa is hard to beat. This remote cluster of islands in the South Pacific offers a wealth of unique experiences and the kind of genuine hospitality that’s become nearly impossible to find in tropical spots nearer to home. The territory boasts pristine white-sand beaches, rugged mountains and lush swathes of rainforest. And the best part? Those who make the voyage to this corner of the world are likely to have the islands’ attractions all to themselves.

There are five key reasons why American Samoa should be at the top of your travel to-do list:

1. It’s an unincorporated territory of the United States. Our federal government plays a very hands-on role in American Samoa, providing funding for a range of services and infrastructure. As a result, water and electricity supplies are reliable, roads are excellent, and the waterfront is fortified against hurricanes. Most of the population receives food aid, and health and education levels are on par with the mainland US.

If you’re an American citizen, arriving here is a breeze: No entry visa is required, there’s no foreign currency to contend with, and if you’re hiring a car, your state license is all the documentation you need. Everyone speaks perfect English—with Californian accents, no less—and you’ll find amenities aplenty, from a branch of the Bank of Hawai’i to bodegas stocked with treats from home.

2. American Samoa has virtually no tourism industry. Partly, it’s because the islanders don’t particularly need the revenue that tourists would provide—plenty of money already flows into the territory from the mainland US. And partly, it’s because the fiercely proud Samoan people are determined not to let their home become another Hawai’i or Puerto Rico. American Samoa’s geographical isolation and the lack of major air services to the islands also play a part. All this makes the territory virtually tourist-free, which is a good thing when it comes to exploring its natural wonders.

Take Nu’uli Falls, on American Samoa’s main island of Tutuila, for example. This pristine waterfall tumbles 150 feet over jagged rocks in the middle of the rainforest. At the waterfall’s base, surrounded by lush foliage and flowering frangipanis, is a sun-lit pool that’s perfect for swimming. Were it anywhere else, this sublime location would be mobbed by visitors, but here, it’s almost always deserted. Worst-case scenario: you may find yourself sharing the falls with a few kids from the nearby high school. 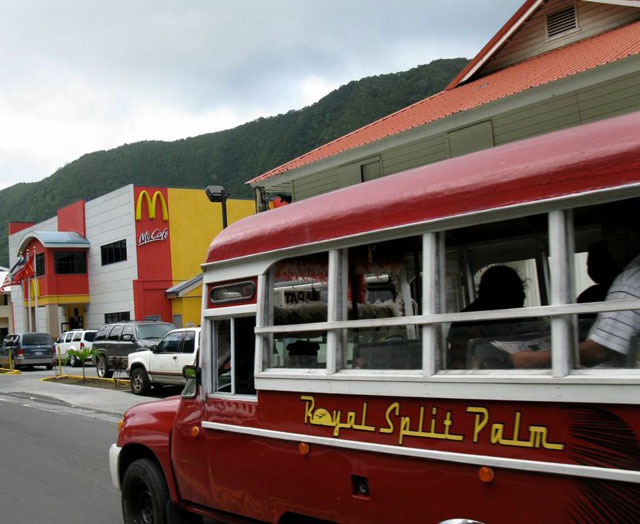 3. The diverse landscape is fascinating. The waterfall isn’t the only enchanting feature on Tutuila. Although the island is small—less than 30 miles in length, and no more than a few miles wide in most places—it is home to several must-visit natural sites and an abundance of flora and fauna. To get your bearings, hike or drive up the 1,500-foot-high Rainmaker Mountain, which towers over Tutuila’s harbor. This misty peak is blanketed in unspoiled tropical vegetation and is a designated US national landmark site. Back at sea level, several picturesque white-sand beaches (like Palagi Beach at the island’s western tip) offer excellent snorkeling and calm swimming. For a contrasting experience, seek out the Turtle & Shark Site: an imposing collection of black-lava cliffs that is the setting of a famous local legend.

Nearby, on the tiny volcanic island of Aunu’u, you’ll find marshes, expanses of quicksand, and a lake—full of eels—that glows red at sunset. American Samoa’s remaining three islands, known collectively as the Manu’a group, have a distinct climate of their own and are characterized by temperate forest vegetation.

4. Ofu Beach is one of the South Pacific’s most stunning locations. Each of the Manu’a islands has its charms, but it’s Ofu that draws the biggest raves from those who visit the area—and rightly so. Ofu is home to what is quite possibly the world’s most captivating beach: A brilliant-blue stretch of water that’s bursting with coral and teeming with tropical fish. Three miles of gloriously soft sand hug the shoreline, and dramatic, forest-clad peaks rise up steeply behind. During the wet season, storm clouds can roll over the beach and back out to sea in a matter of minutes—a dramatic touch that adds an element of unpredictability to what is otherwise an idyllic location.

What you won’t find on the beach is an overpriced bar, or a fancy resort, or crowds of sun-seekers. Ofu is sparsely populated, and those who live here prefer to swim closer to the main village. The island itself can be tricky to reach—its airstrip is so short that only the smallest of planes are allowed to land here, weather permitting. If you do make it to Ofu—and that’s a big ‘if’—the awe-inspiring beach will almost certainly be yours to enjoy alone.

5. The lodgings will make you feel like part of the family. There are a number of accommodation options on Tutuila, but by far the most agreeable are two boutique B&Bs run by the same husband-and-wife team. The first, Le Falepule, occupies a prime position overlooking the main harbor, while the second, Moana O Sina, sits atop cliffs on the outskirts of a village called Fogagogo.

Both locations are comfortable and spacious, with big-city essentials like industrial-strength air conditioning, Wi-Fi, and a laundry service. The biggest draw, however, is the small-town hospitality of proprietors Dean and Isabel: depending on when you stay, you might be treated to a home-cooked dinner or a guided tour of the island. Both B&Bs serve as ideal base camps for your exploration of Tutuila—and if you’re hoping to visit the far-flung Manu’a group, Dean and Isabel will provide the advice you need to get there.

Dan Stapleton is a writer and editor currently based in Sydney, Australia. His work has appeared in The Guardian, The Australian, Rolling Stone, Alternative Press, and others. He can be contacted via email.

#American Samoa
#gothamist getaways
#Polynesia
#travel
#original
Do you know the scoop? Comment below or Send us a Tip