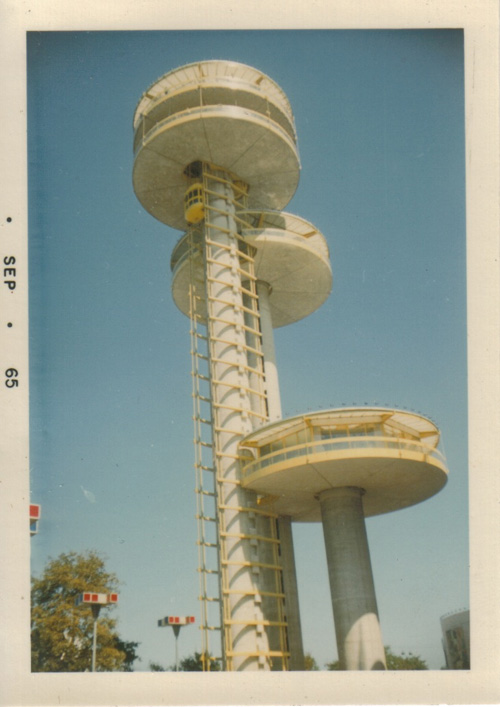 Above is a picture of the observation towers at the New York State pavilion of the 1964-65 World's Fair in Flushing Meadows, Queens. A flickr member scanned the picture, and many others, after he found a scrapbook on the street in Cambridge, MA. He believes that the photos were taken by a woman named Lillian Seymour, who visited the World's Fair in 1965.

The 1964-65 World's Fair in Queens was the only World's Fair not sanctioned by the Bureau of International Expositions (BIE), which objected to the organizers (headed by Robert Moses) charging exhibitors rent to participate, and the extension of the Fair over two years. The BIE urged member nations not to participate, so the international portion of the 1964-65 expo was primarily populated with smaller nations eager to showcase themselves in NYC. In the end, the World's Fair in Queens was a financial failure and the grand park that Moses envisoned building with the proceeds was not to be. The observation towers remain, however, as does the 12-story Unisphere, which was the centerpiece of the event.

(untitled photo of observation towers at the New York State pavilion at the 1964-65 World's Fair, via ninecormorants at flickr)