In his 1997 novel, The Wind-Up Bird Chronicle, Haruki Murakami writes, "Dawn in Mongolia was an amazing thing. In one instant, the horizon became a faint line suspended in the darkness, and then the line was drawn upward, higher and higher. It was as if a giant hand had stretched down from the sky and slowly lifted the curtain of night from the face of the earth. It was a magnificent sight, far greater in scale...than anything that I, with my limited human faculties, could fully comprehend." Though you're likely not going to witness such a thing in the nation's congested capital of Ulaanbaatar, you don't have to travel far from the city to get a hint of what Murakami describes.

First: Getting to Ulaanbaatar

Daily flights into Chinggis Khaan International Airport are available from Beijing, Berlin, Seoul, or Moscow. There are a number of overland options as well, but one of the more interesting ways to get there is the Trans-Mongolian, a route of the Trans-Siberian railway. Originating in Moscow, the Trans-Mongolian traverses Siberia, heads south at Ulan-Ude, wends its way across the Gobi Desert, and terminates in Beijing. 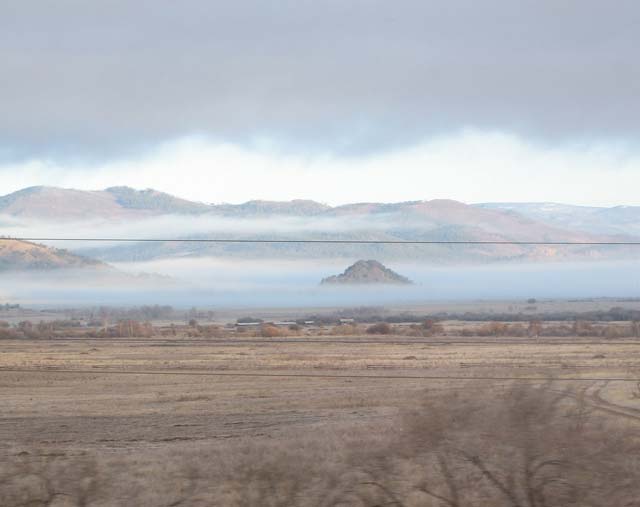 Along the Trans-Mongolian Railway (Mike Chu)

Once in Mongolia, the most convenient way to get around the area is with a local tour operator. Some notable ones are Golden Gobi, Ger to Ger, and Nomadic Mongolia.

Going Up the Country

If the hustle and bustle of a shambling, post-Soviet urban center is not your speed (though, really, you should stay a few days and soak up UB's fascinatingly chaotic charm), you can head for the hills. Terelj National Park (also known as Gorkhi-Terelj for the surrounding Gorkhi mountains) is about 50 miles northeast of the city, so it's not exactly off the beaten track. 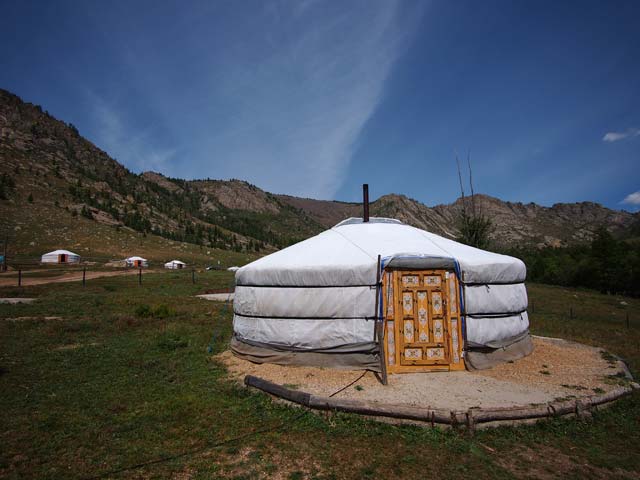 A ger in the park (Umz_p/istockphoto)

By local standards, it's touristy, with numerous ger (yurt) camps dotted throughout and run by different local tour operators. But there's plenty of rolling green hills, endless sky, and Murakami's amazing dawn horizon to go around. As one of the largest protected wildlife areas in Mongolia, you'll certainly feel like the last person (or tour group) on earth.

Sleep Under the Stars

Though there are Western-style accommodations in the park, you didn't travel all this way to stay in a hotel. The best way to experience this part of the country is by renting a comfortably appointed ger. Each ger camp is situated on its own vast acreage in the park, with approximately 5-20 tents per camp.

At the center is usually a main lodge, which may house a restaurant, small shop, and shower facilities. Terelj Lodge has gers and cabins, plus a well-known restaurant and beer garden. Tamir Tourist Camp has laundry services and a sauna room, while Guru Camp has a small art shop.

A ger is designed to facilitate easy construction and dismantling. (One takes about two hours to build.) It consists of a latticed circular wooden frame and roof poles covered with thick wool felt. The felt is covered with canvas, and then everything is lashed together with long ropes. Inside, an iron stove sits in the middle of the living space, with a chimney that pokes out the top. A traditional ger's interior is richly decorated with thick carpets and colorful, symbolic patterns painted on wooden furniture or embroidered on fabric. If you're lucky, you may have the opportunity to help construct one with some of the guys from a local nomad family. You'll mostly just get in their way, but your fellow builders will generously humor you as you lumber about trying to be helpful. 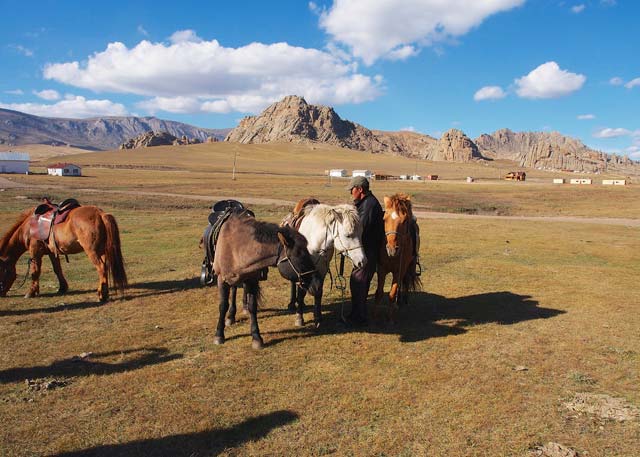 While your days can be spent exploring the vast area on foot or horseback, one of the more novel activities is the chance to visit—and sometimes stay overnight with—one of the herder families who call Terelj their seasonal home. Visitors are welcomed into a Mongolian home and offered, at the very least, milk and cookies. The milk is called airag; it is made from fermented mare's milk, and it is a Mongolian staple in the country's social and ceremonial life. You will usually find a large vat or barrel of it sitting near the ger's entrance, where it is stirred and tended to regularly. The taste, something between salty, sour, and tangily alcoholic, is a hard one to choke down, but fortunately you only need to take a hint of a sip to avoid offending your hosts. 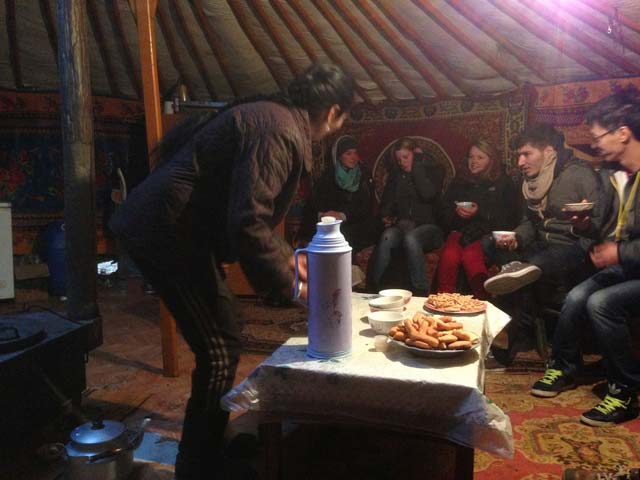 Meanwhile, the cookies on offer can be enjoyed by even the least gastronomically intrepid. Boortsog are made from a dough of flour, water or milk, sugar, butter, and sometimes yoghurt and yeast. They are then deep-fried in either mutton fat or vegetable oil.

Look for the Turtle

Take a hike or hire a horse to explore the valleys, where wildflower meadows rise into alpine hills and rocky outcroppings. Two well-known and easily accessible rock formations (named for their likenesses) are Turtle Rock and Old Man Reading a Book, also known as Praying Lama Rock.

Make a Pilgrimage to Ariyabal

Ariyabal is a small Buddhist meditation temple nestled in the park's rocky mountainside. Though it is open to the public, it has the feel of a secluded monastery. To get there, you'll cross a long suspension bridge (called the "Bridge to Heaven") then head up 108 very steep steps to the temple building. From the top, you will be rewarded with a stunning view of the valley below.

Visitors are free to enter the temple building, a tranquil space of ornate Buddhist color and design. The exterior of the building is surrounded on three sides by wooden prayer wheels. Make sure to spin them clockwise.

June through September is the height of the tourist season and offers the most agreeable weather, with highs in the 60s and 70s. Winters are brutal.

Alison Burke Griffiths is a Sydney- and US-based writer and editor. You can email her at a.burkegriffiths@gmail.com