Euro 2008 Quarterfinals -- Where to Watch 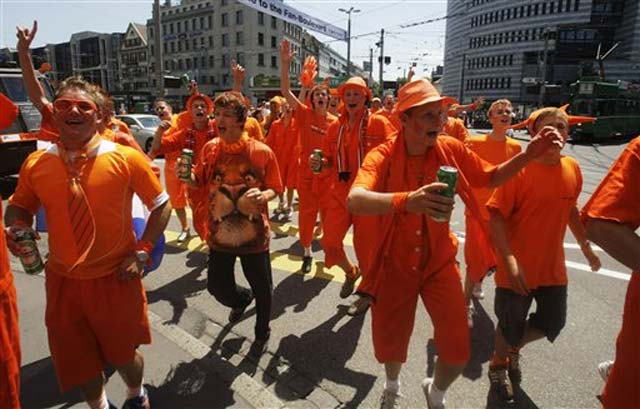 The European Cup soccer tournament heads into the quarterfinals this weekend and it's shaping up to be one of the most exciting and highest-rated international tournaments in some time. For those who contend that soccer is too boring to watch, one should try watching it surrounded by football fanatics who can not only clue you in on the finer parts of the game, but whose enthusiasm is infectious. Turkey scored a stunning last-second goal yesterday to tie its game against Croatia and advance.

The Dutch have thus far been phenomenal and enter the Elite 8 as the hands down favorites. The team scored 9 goals during the first round of the tournament. The Oranje, as they are known, meet Russia on the pitch today at 2:30 p.m. So where to watch?

The New York Times had some suggestions earlier this week. NewYorkSoccerBars has a handy schedule and map of where to catch matches. And FirstTouchOnline has its perennial list of bars that show soccer in the city. Gothamist weighed in on where to watch back in 2006 during the FIFA World Cup. And if you want a briefing on the tournament, ESPN's Page 2 can help you out.