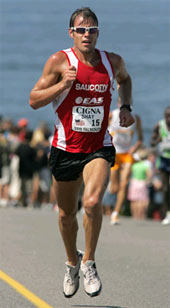 The medical examiner's office said the autopsy of top long distance runner Ryan Shay is inconclusive. Shay collapsed during the U.S. Olympic Marathon Trials on Saturday in Central Park and died shortly after.

The ME's office said, "We want to take a closer look at the heart tissue," and will probably come to a conclusion in a week. His father had revealed his son was diagnosed with an enlarged heart at age 14, and Joe Shay told the Daily News that last summer his son mentioned that doctors said he would eventually need a pacemaker, "He seemed to be fine but when he mentioned the pacemaker, you get a little queasy. Now I wonder, did he tell me everything?" He also said he would release the toxicology results from the autopsy to quash rumors of doping.

New York Road Runners President Mary Wittenberg said to the NY Times, "I think if you have a heart ailment, you need to be extremely careful. But for most of us, if somebody said we had a heart issue that maybe someday we would need some kind of help, I don’t know, would you stop doing what you love? For Ryan, being a professional athlete was so important.”

The New York Road Runners Club has an obituary for Shay. A service is planned for next week in Shay's hometown of Central Lake, Michigan, and his coach Joe Vigil will be one of the speakers.