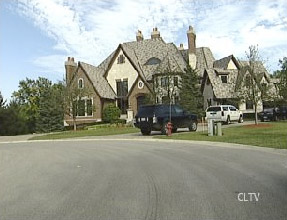 The Knicks have a bad history of getting robbed when it comes to the Windy City and Eddy Curry (forget all their history with the Jordan-era Bulls). First, the Knicks traded for Eddy Curry in a deal that also gave the Bulls the 9th pick in the 2007 draft (they picked Joakim Noah) and early Saturday morning Curry was robbed at gunpoint in his suburban Chicago home. Three masked intruders tied up Curry, his wife and an employee with duct tape and robbed the home of jewelry and cash.

The well-to-do suburb of Burr Ridge, which is southwest of Chicago, is home to several former professional athletes. Burr Ridge police officials think that Curry robbery wasn't a random incident. The robbery also shares similarities with a case involving another NBA player, Antoine Walker. Walker, who plays for the Miami Heat and is also a Chicago native, was robbed in the same fashion - tied up with duct tape by masked intruders - almost three weeks ago.

Police officials don't have any suspects in either robbery yet and no fingerprints turned up in the house. The 24 year-old Curry was drafted by the Bulls in the first round of the 2001 draft (4th overall) and traded to the Knicks before the 2005-06 season. He averaged 19.5 points and 7 rebounds per game last season.

Image of Eddy Curry's house via the Chicago Tribune