I have a very distinctive childhood memory of my father eating bees.

My family and I were in a restaurant in the mountainous part of Taiwan and in front of us lay a smorgasbord of food from the island's aboriginal groups. Think stir-fried fern with anchovies, salt-baked fish, and tender wild chicken roasted until the skin was like velvety paper. Somewhere on the table were fried chunks of unidentifiable meat.

"What is that?" I remember asking.

"Bees," my mother responded, in plain disgust. She's never been a fan of odd foods. My father shrugged and happily popped a couple of them in his mouth while my brother and I, barely in our teens and thoroughly Westernized at the time, watched wide-eyed with fascination. He single-handedly finished off the entire plate. We wouldn't touch it.

It's now decades later. I'm a food writer and the prospect of such a culinary oddity is fascinating. I ask my parents about the memory and they have no recollection of it. My dad eats too much bizarre food on the regular for any one particular dish to stand out. But for the sake of research, we call up one of my aunts.

"Those weren't honeybees," my aunt says. "He was probably eating hornet larvae." 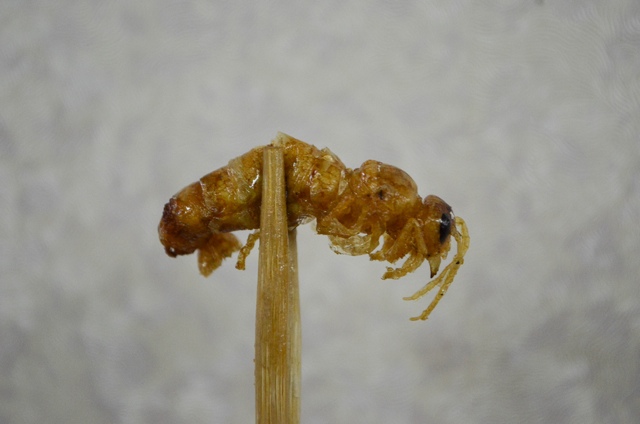 The next week we're at a restaurant called Ah Min near her house in Hualien. Hualien is a gorgeous beachside county on the west coast of Taiwan. A two-hour train ride from Taipei, there's a good amount of indigenous cuisine there; the aborigines make up 28% of the population.

Ah Min is the name of the owner, a quiet, half-aboriginal chef who has 33 years of cooking experience under his belt. His store has been around for 16 years and it's known throughout town for its peculiar bites. They have crocodile meat, if you call ahead. There's pig head cartilage, silkworm larvae, and of course, hornet larvae. While it's bizarre food for foreigners, locals consider all of the above drinking food. We order two bottles of Taiwan beer to pair with the meal.

"You have to have beer," my uncle notes. "Everything is fried."

The larvae can be ordered in one of two ways—sautéed with salt and pepper, or cooked with chili oil. We choose the former. A medium plate of hornet larvae is 400 NT ($12 USD) and it's 500 NT ($15 USD) for a large plate. We get the medium.

At our request, Ah Min lets us photograph the plate of hornet larvae before he cooks it. The bugs are all at different stages of maturity. Some are tiny ovals, smooth and round, others look like full-fledged hornets. They all have a milk chocolate-hue and from far away, can probably be passed off as chunks of candy. But up close, the gnarly appendages and buggy eyes indicate that they are anything but. 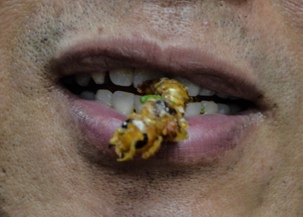 As we wait for our food, my aunt and uncle explain the culinary tendencies of the aborigines.

"They were poor so they would eat anything they could get their hands on," my uncle says.

"Why larvae?" I ask. "Why not fully-matured hornets?"

"The larvae stage is when the hornet is most tender," he says.

"Is this a common dish for the Taiwanese people?" I wonder out loud.

"In previous generations, yes. But not so much anymore," my aunt explains.

Ah Min brings out the cooked plate. Most of the hornets, thoroughly cooked, are unrecognizable now. They have been stir-fried with oil, pepper, salt, basil, garlic, and scallions. I pop one in. There isn't much meat; there's a hollowness to them. So I eat a spoonful.

The taste is akin to chicken. The seasoning, a strong mix of white pepper and salt, is really what drives the dish. It's similar to salt and pepper shrimp, but there isn't an ounce of juiciness to the insect. Curious, I pry one in half with my chopsticks. The meat is white—like chicken.

They were quite good. Hornet larvae doesn't taste as disgusting as it looks. The insect pairs well with rice and with enough beer, you'll forget that you're eating baby bugs. My extended family and I ended up cleaning up the entire dish while my mother looked on with the same bewilderment she had decades before.

"Never," she says, staring at my dad. There he was, oblivious to our conversation, eating the hornets with the same delight as he did decades before.

Clarissa Wei is a Los Angeles-based writer who knows a lot about Asian food and the hidden gems of her city. She lives in the San Gabriel Valley, and you can find her making dumplings from scratch or hiking the local mountains. You can follow her on Twitter at @dearclarissa

#gothamist getaways
#hornet
#hornet larvae
#taiwan
#original
Do you know the scoop? Comment below or Send us a Tip