Displaced Bushwick Families: Landlords 'Would Rather Rent To A White Man With A Dog Than Me With My Kids' By the end of the 2000s, Bushwick was in the midst of drastic changes. According to Census data crunched by the city's Department of City Planning, Bushwick experienced a net in-migration of 9,155 non-Hispanic whites from 2000 to 2010, more than tripling the previous population for the neighborhood. During that period, almost 20,000 black and Hispanic residents had moved out.

After a brief pause during the economic crash of 2008, Bushwick's flood of newcomers kept on coming, accompanied by a spate of condo towers, each trying to outdo the next in announcing itself fit for urban pioneers. On DeKalb near Bushwick Avenue, one new industrial-gray modernist condo building adopted the name Colony 1209 and equally over-the-top rhetoric, declaring itself "Brooklyn's new frontier" and announcing it would be marketing itself to "like-minded settlers."

Local realtors no longer needed to put "East Williamsburg" on their listings: Bushwick had become an internationally known brand, with a company offering an artisanal Bushwick-scented candle for the slim price of $81 ("scent highlights include terpentic notes of drying oil paint on canvases"), and Saturday Night Live officially ushering Bushwick stereotypes into the comedic mainstream with a sketch parodying neighborhood black youth talking trash about their gelato purchases.

Bushwick housing advocates soon reported an intensification of the harassment and eviction techniques that had been rampant before the downturn. "The first thing they say is 'This building is 100 years old, I'm going to demolish the building,'" said Angel Vera of Make the Road New York. "They also say, 'I'm the new owner, you have to leave'—and some tenants who don't know their rights of being rent-stabilized, they move. Some landlords threaten new immigrants with calling immigration, or ACS, the children's agency, because they live in bad conditions."

Another tactic, said Vera, was "to hire local people, who are Latino, to harass tenants—they go there in order to fix the boiler, they leave without service for a couple of days." 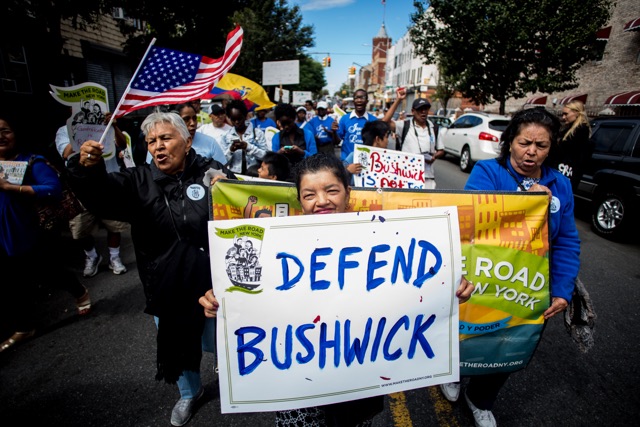 At Make the Road's bustling headquarters in a Grove Street storefront, Joel and Maria Najera, who ten years earlier had moved from East New York to a rent-stabilized apartment on DeKalb Avenue in search of better schools for their kids, said they watched as their landlord, through a combination of offering tenants cash to move and persistent harassment, cleared out four of the apartments in their six-unit building. "People came and said the landlord said, 'You need to get out this week'—three times, different people," said Joel. One of these, said Maria through a translator, told them they had to leave, "because he was going to burn the building."

Without a lease—they had had one previously, but their landlord had stopped providing them four years earlier—the Najeras were left to battle for their home in court. Their neighbors, meanwhile, had mostly left by then, some taking buyouts of as much as $15,000 to move out, though even then finding affordable space elsewhere remained a challenge. "Another family, he moved them to another apartment" nearby, said Maria. "After four years, the rent rose too high and they couldn't pay it." Priced out a second time, that neighbor ended up moving to Jamaica, Queens. They were all replaced, she said, with groups of new tenants willing to pay as much as $3,000 to share a two-bedroom apartment that previously rented for less than half that amount.

It was a fate the Najeras feared would soon befall them. If they couldn't find a new apartment nearby, they worried, they would be forced to return to East New York, which they had left for Bushwick in the first place in search of better schools and less crime. Without her apartment, explained Maria, "I would have to move to a place where there are gangs, where my kids won't be safe."

One reason families were being forced to leave the neighborhood, numerous residents reported, was that Bushwick landlords wouldn't rent to families with children—something that remained a common practice even though it's illegal under the federal Fair Housing Act. "When you call the number and ask, 'Do you have an apartment for rent?' the first question he asks is if you have children," said Diana Zarumeno, who along with her husband and three pre-school-age kids was evicted from her Bushwick apartment; they ended up having to move across the Queens border to a more expensive apartment in Ridgewood. When she called realtors to ask about available apartments, she said, the answer was always, "'If you have children, then no, the apartment is already rented.'"

Maria Najera concurred that with two teenage kids, looking for a new space in Bushwick had proven absolutely impossible. Her landlord, she said, told her, "he would rather rent to a white man with a dog than to me with my kids." 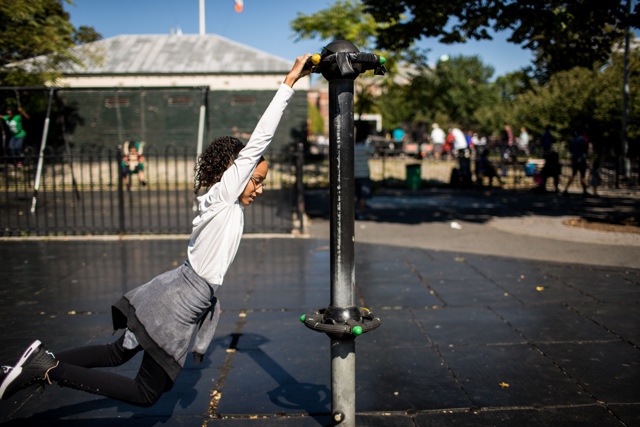 Where families like these were ending up was a mystery that no one, including city housing agencies, seemed equipped to answer. The U.S. Census Bureau's annual American Community Survey asks residents where they have moved from since the previous year—but it only tracks that to the county level, making it impossible to separate those who relocate from Bushwick from those who migrate from Park Slope or Coney Island. (The Internal Revenue Service likewise keeps records of who moves where, but only by county.) The city Department of Education, which could examine school registration records, said it doesn't release information on the movement of school-age children between districts. Only the Department of City Planning had attempted to investigate migration from New York City's gentrifying neighborhoods—and because it did this by crunching the Census data, no detailed migration information was available.

This left only anecdotal accounts from Bushwick residents and tenant advocates, who painted a picture of former neighbors scattered to the four winds. "When I hear from families, a lot of them are moving to Rockaway and East New York and Elmhurst," said Akchin. "No one is particularly tracking it, and I find that kind of concerning." Bushwick Housing Independence Project organizer Yolanda Coca added that some longtime residents were leaving the city entirely. "It's a very tough situation," she said. "I see people getting crazy looking for another place to move out when the landlord is pushing them out." When she called one recent client to invite her to a meeting, she said, she was told that she was now living in Philadelphia.

And with their friends and neighbors scattering, displaced Bushwick residents were losing something else as well: the community ties that had slowly re-knit the neighborhood after the devastation of the 1970s. Coca, who had returned to her old neighborhood in 2005 to work at the Bushwick Housing Independence Project in part because she was a longtime parishioner at St. Joseph's, the Wilson Avenue church where the project was located, noted that even Bushwick residents who were able to relocate couldn't bring with them their churches, their favorite stores, their friends. "Your church, it's a very important piece of your life," said Coca, who had counseled both Maesa and Colon during their housing battles. "My church is my second home—half of my life is here. And people been losing all of that."

The face of neighborhood's commercial corridors had also changed drastically. In the blocks south of the Jefferson Street L station, the first early signs of change—a Thai restaurant, a new coffee bar whose owner eagerly waved over any white passersby in hopes of bringing in kindred spirits—had exploded into a panoply of bars, gourmet hot dog stands, and realtors with cutesy names. 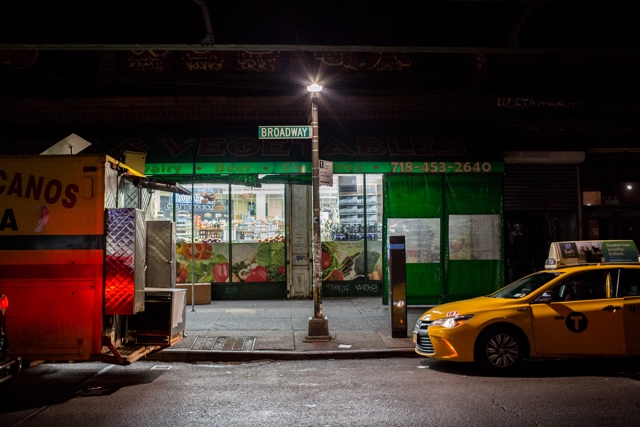 On the street, white faces were now a common sight. And stepping into certain stores was like a trip to central Williamsburg: On a typical day inside the City Fresh Market across from Maria Hernandez Park, the clientele was 90 percent white.

"The Latino bodegas, they're disappearing," worried Coca. It was a shift that had repercussions even for those, like her, who were lucky enough to own their homes, or to have leases (or landlords) shielding them from sudden eviction. "Sometimes people say, 'Well, I don't have a problem with my apartment.' And I say, you do have a problem, because gentrification is affecting everybody, because everything goes up. I hate when people say, 'I'm not getting affected by the change here.' I say, you do. In one way or another, you do."

#brooklyn
#bushwick
#bushwick wars
#gentrification
#longform
#original
Do you know the scoop? Comment below or Send us a Tip