Did Tiki Light a Torch Under Eli Manning's Butt? 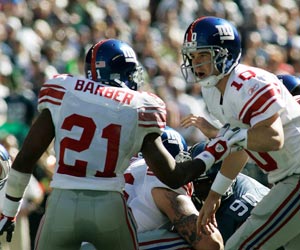 Eli Manning has never struck us as a high-strung type of guy. After a mistake, he seems to shrug it off in a "ho-hum, what can you do?" way and then moves on. That's not what happened when he responded yesterday to Tiki Barber's comments during halftime of Sunday's Giants-Ravens pre-season game. Barber, who was making his debut on NBC's Football Night in America, said he asked Manning to make a motivational speech once and that Manning was "very uncomfortable doing it. Sometimes it was almost comical the way he would say things." He also said that Manning was "very good as a quarterback" and that "he's been a leader in some games." But he wonders if Manning "Can he be a leader of men?"

Given the opportunity to respond to Barber's comments, Manning criticized the former running back's questioning of the head coach and early retirement plans:

"I guess I could have questioned his leadership skills last year with calling out the coach and having articles about him retiring in the middle of the season, saying he's lost the heart. As a quarterback, you're reading that your running back's lost a little, the heart, him playing the game, and it's about the 10th week. I'm not going to get concerned, I'm going to go out and play ball."

It's a good thing the two aren't teammates anymore.

While we've never been inside a Giants huddle, it looked to us like there were plenty of times last season where the leadership qualities of everyone big name on the team could have been questioned.

Photo of Tiki Barber and Eli Manning during last season's game against the Seattle Seahawks by AP/Ted S. Warren