Cuenca, Spain And Its (Yummy) Delights

I'd forgotten how good chocolate is. And sugar. Sugar is damn good too. That is, until this moment.

I'm sitting in one of many picturesque plazas in Cuenca, Spain, shoveling thick, rich chocolate into my mouth by way of a crunchy churro spoon. It's sinfully good—not like American hot chocolate but more like liquid dark fudge-and my memory is easily jogged. I tell myself I will never eat a cold, day-old churro bought from a vendor on the Union Square subway platform ever again. Nothing compares to churros in Spain, and the New York setting could never compete. This morning the May sun seeps through the trees and Spain's hot summer temperatures have yet to set in. As I munch I watch suited-up Spanish citizens walk leisurely through the square, shifting their briefcases from one hand to the other. Occasionally I lick chocolate or sugar off my fingers.

When you visit Cuenca (pronounced KWEN-ka) it will likely be as a recovery stopover. You've partied hard in Madrid, as I have, and you need to give your liver a break before heading to Valencia and Barcelona, as I do. I don't really have a plan but Cuenca is exactly the type of place to land without a plan. Unlike its sister cities to the north, east and west (Barcelona, Madrid and Valencia), Cuenca is small, completely manageable on foot and boasts a small but unique list of sites and museums to visit. 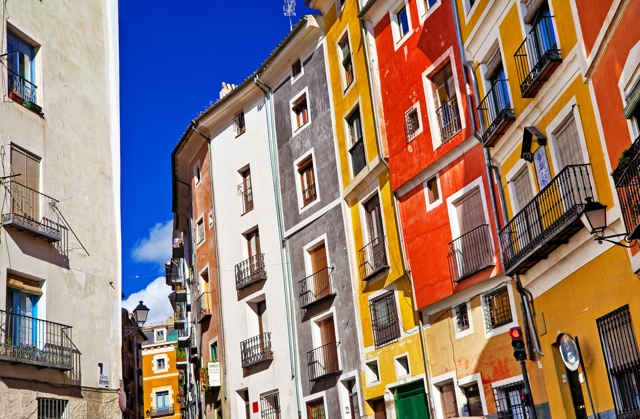 In 1996, Cuenca was declared a UNESCO World Heritage site because its preserved architecture and links to Spanish culture of old. The Moors built it as a fortified city around 700 AD, but they shouldn't have worried about attacks. The older part of town is built not on top of but into the mountains, where houses perched on stilts jut off the sides of cliffs. These houses are appropriately named casas colgadas, or hanging houses. Attackers would have to be crazy to try and take Cuenca, because they most likely would have slide down the cliffs to their death, leaving the Moors untouched.

Every day of my trip I start in a different bakery around town. Such places usually adjoin a plaza so patrons can sit on sunny park benches, eat pastry—churro or buñelo (donut) or pan de huevo (sweet bread) or bizcochos borrachos (drunken cake)—sip chocolate or café con leche and read Spanish newspapers. I am just one of them. 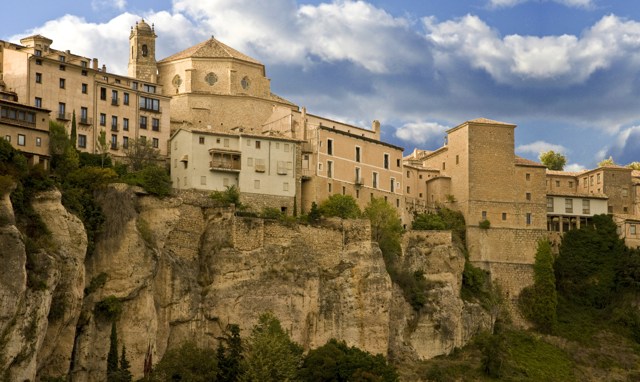 Once my sugar high sets in, I walk along the Huécar or Júcar rivers and admired the fortress-like walls. There are the previously mentioned hanging houses, most of which give tours, or Cuenca Town Hall to explore. Cuenca has always been a haven for artists, and the world-renowned Museum of Spanish Abstract Art features avant-garde works by many Spanish artists including Pablo Picasso and Francisco Goya.

For lunch I hit the local market for local specialties. (Read: regional Manchego cheese, purple garlic, and jamón ibérico, a Spanish cured ham. When shaved thinly, the swine is light and airy, like eating salty, rose-colored cotton candy.) On days I'm feeling vegetable deprived I pick up emerald, tightly bound asparagus spears to sauté in olive oil and lemon juice. I'm staying at an apartment, so I invite a friend over and, as the Spanish do, we uncork a bottle of wine. After lunch there are siestas. 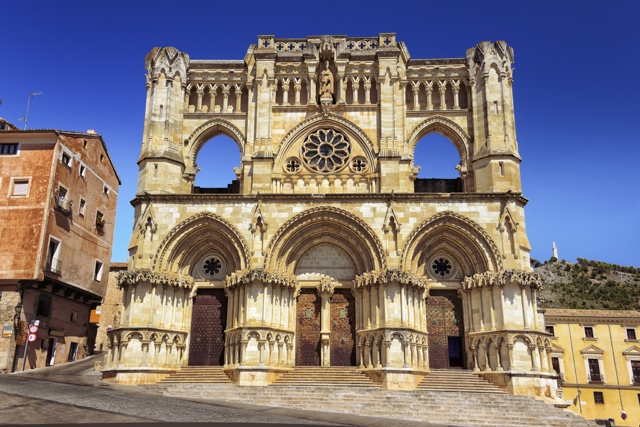 In the afternoons I walk up and down the surrounding hills as joggers and cyclists whiz past me and visit the local cathedral, or Nuestra Señora de Gracia Catedral, the first Gothic church built in Spain. Construction, which took almost 60 years, was completed in 1257 AD. 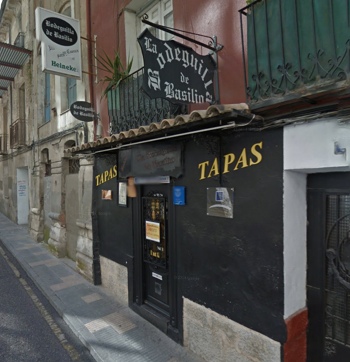 La Bodeguilla de Basilio (Google Maps)
At night my friend and I hit the bars for a tapas-style dinners. La Bodeguilla de Basilio (The Basil Cellar—swoon) is a popular hotspot and even when we go early (8 p.m., which is early for the Spanish) we wait because there are only a couple of tables. We order beer or perhaps more wine for a few Euros and with each beverage comes a meal-size tapa. With the first glass comes grilled bread with tomatoes, roasted peppers and fried quail eggs. Then comes grilled squid with lemon wedges. The third was grilled meats and the fourth to tell you the truth I can't remember the fourth.

I tuck into bed nightly around 2:00 a.m. (again, early for Spain), but hey, I'm recovering. In the morning, bleary-eyed and craving chocolate, I set out in search of another sweet Spanish breakfast.

Cuenca is a 45-minute express train ride from Madrid. For more information, visit Spain.info. When I get a craving for churros con chocolate and can't book a flight, I hit up La Churreria in New York City (Five Points, currently being renovated, had a wonderful version; it's unclear if it'll be on the future menu) or Mr. Churro in Los Angeles.

Natalie Rose is a freelance writer and multimedia producer. She writes about travel and culture, fascinating people she encounters on her travels and anything to do with food. She produces documentaries, branded content and commercial projects.