Contest Alert: Flight of the Conchords Want To Give You A Free Zune!

Certainly you've heard of Flight of the Conchords by now. The music-comedy duo that scored their own HBO series after cracking up millions worldwide are playing Gramercy Theater tonight in front of a sold out crowd. Didn't get tickets? Yeah, neither did we. But the two chaps were kind enough to give us a Zune as a consolation prize for you, so now at least you can laugh out loud on the F train while watching their show.

Want to win it? Email us at GothamistContest (a) gmail dot com and tell us a joke. 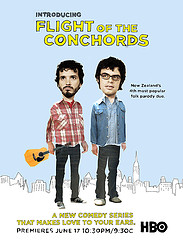 Flight of the Conchords starts this Sunday on HBO, airing at 10:30 pm. Check out the first episode here!