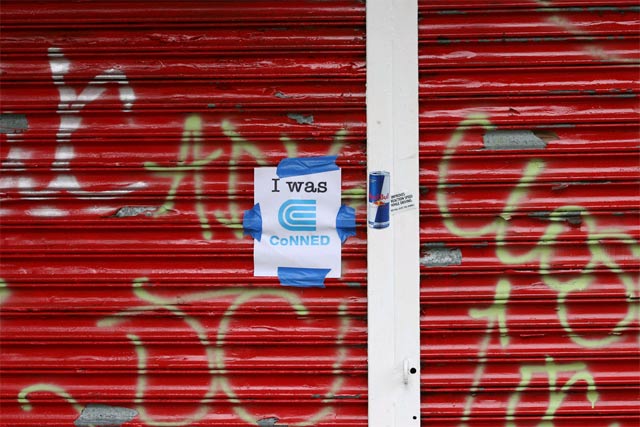 Photograph of a closed bodega in Astoria, on day 5 of the 2006 blackout, by Dan Dickinson on Flickr

Typical: Con Ed has decided to offer victims of the 2006 blackout a measly $100 each. To businesses, such as restaurants and markets, that lost thousands of dollars of merchandise, it's an insult. Mezzo Mezzo restaurant owner Charlie Kourakos told the Daily News, "We lost, I can say, around $50,000. It's ridiculous for them to even offer us a hundred bucks."

The blackout, which blanketed the Queens neighborhoods of Astoria, Long Island City, Sunnyside, and Woodside and affected thousands of residents and businesses, lasted over a week. Con Ed initially claimed only a 2,500 customers were affected, but then admitted one customer can equal one building, like an apartment building full of hundreds of residents. In the end, 65,000 customers were without power--174,000 people.

Con Ed will invest $40 million in infrastructure repairs, apologize, and divvy up the $17 million fine to pay the victims. The utility is also raising fees 5% this month and more hikes may be ahead.

#blackout
#cheap
#con ed
#queens
Do you know the scoop? Comment below or Send us a Tip
A new Gothamist is coming! We’ve moved comments over to our beta site. Click here to join the conversation and get a preview of our new website.