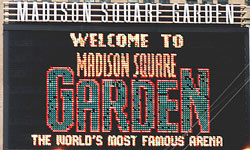 Today we wrote about the discontinuation of the requirement for subway conductors to announce a train's arrival at the 47th-50th St. Rockefeller Center station with a plug for the "Top of the Rock" observation deck. Most commenters found the idea of corporate sponsorship of subway stations distasteful, let alone the fact that this was an enforced and required announcement that generated no revenue for NYC Transit. Some people do enjoy when their conductors deviate from the script, however, like TimSPC:

I can't remember if it's the F or the D, but one of the guys has a great spiel for 34th St. He does a "34th St, Penn Station, change for the, etc..." script and then adds, "Madison Square Garden, the world's most famous arena, home of the Rangers, Knicks and Liberty." I appreciate that, too.

One can read the whole litany of reader announcements at the comment thread here.

Image cropped from Madison Square Garden, by howsentimental at flickr