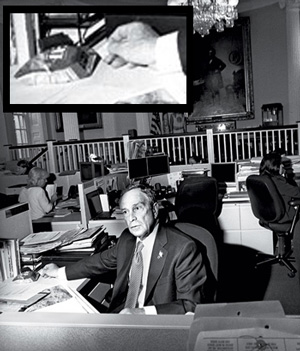 Today we looked at Mayor Bloomberg's snacking habits. Was the banisher of trans-fat recently seen with an open bag of Cheez-Its on his desk? We'll likely never know (at least, not until his greasy fingerprint-laden desk set is back from the lab). While we await the results of the faux cheese traces, let's take a look at what some of our commenters had to say:

WesTheYeTi calls out the loophole Bloomberg clearly created so he could keep snacking on the job: "The ban of trans-fat is a good thing. I don't think anyone can deny that. But keep in mind it wasn't a ban against packaged food with trans-fat. It's all about moderation. Let the man use the loophole he created."

While JRod5417 pointed out: "Everybody loves Cheez-Its! And besides, as long as he consumes the suggested serving size, who are we to judge?"

DId Giuliani go to strip clubs after he took them out of Times Square? Probably. So we say let Bloomberg have his artificial cheese snack.

#bloomberg
#Cheez-It
#comment of the day
#giuliani
#mayor
#mayor bloomberg
#strip clubs
#Times Square
#trans fat
#wired
Do you know the scoop? Comment below or Send us a Tip