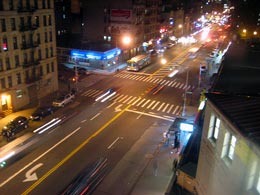 Yesterday, the police were called during a charged meeting that saw the City Council approve Harlem rezoning in a 47 to 2 vote. Opponents of the plan yelled "sellout" and "liar," prompting their removal from the Council's balcony.

The plan will usher in new development around 125th Street, with denser and taller buildings. City Council member Inez Dickens, who represents the area and decided to approve the plan after the Planning Commission agreed to make 46% of housing "income-targeted", lower the building heights and invest millions in Marcus Garvey Park, said, "I’m fighting to support and protect my community. It’s an inclusionary program never before done in the history of this great city.”

Other City Council members hoped Dickens's negotiations would pave the way for their rezoning talks. Councilwoman Rosie Mendez of the Lower East Side said, “We’re going to bring Inez Dickens to those negotiations because we’ve only been asking for 30 percent [ affordable housing]. Inez, what can you get us?”

The two no votes were from members Tony Avella and Charles Barron, who both criticized the plan for planning "top down," instead of bottom up with the people's perspective. Avella said, "It’s not going to be the Harlem the people there think it’s going to be. It’s going to be Park Avenue," while Barron predicted, "Ten to 12 years from now, they will see that the housing will not be affordable. This will be the wholesale sellout of Harlem from river to river."

The Sun reports that yesterday a judge rejected a request for a temporary restraining order on the rezoning.