You know you've found yourself asking yourself this question: what would happen if Manhattan was the last bastion in a civil war that has reduced the United States' holdings to Long Island and pitted neighborhood against neighborhood in the quest for survival and peace? You'd get Brian Wood's DMZ. The graphic novel illustrator and writer has been telling the story of Matty Roth, a Long Island photojournalism intern who crashes on Manhattan and gets an inside look at life in a war zone, since 2005. The 8th installment comes out one June 2nd, and Wood told us a little about life in the city and what it's like for an outsider to work his way in.

When did you first come to New York? I moved here a year or two out of high school, so that would be 1992. It was something of a big leap of faith on my part—I knew I had a place to crash with my older brother but it was one of those situations where I had hardly any money, and a single backpack full of clothes. I bought a one-way bus ticket from Burlington, Vermont and kind of burned bridges as I left. I was all-in. Stupid, but committed.

What brought you here? Officially, to go to art school, although I hadn't yet applied. I spent that first year in the city working for $6/hr at a skate shop on 8th street and filling out college applications. I did well with that, and chose Parsons School of Design. After I hit 21, I got a little bit of money from an inheritance, which paid for my first year of school and a grimy $325/month bedroom on East 3rd Street for a few months. After that I worked at 99X—which I think recently closed? That's sad.

What first gave you the idea for the DMZ story? That's always hard for me to answer. It's really a lot of little things that added up over time. A big part of it was just living in the city for so long. Actually, when I was working up the first proposal for DMZ I was living in San Francisco (I tried it for a year, it didn't take) and I was really, really homesick and missing the culture and diversity of NYC. I really had New York on the brain. Combined with current events—this was 2003-4—and a bunch of pop culture references including Escape From New York, you get DMZ.

How did you do your research on all the different neighborhoods in the city? I didn't have to do too much research on the city itself. At this point I had over a decade put into living here, first in Washington Heights, then the East Village, Union Square, then Hoboken for a bit, then Bed-Stuy, Bushwick, and Park Slope. I had also spent a couple years during college as a bike messenger, and even if there were nothing else, that alone gave me a great education. 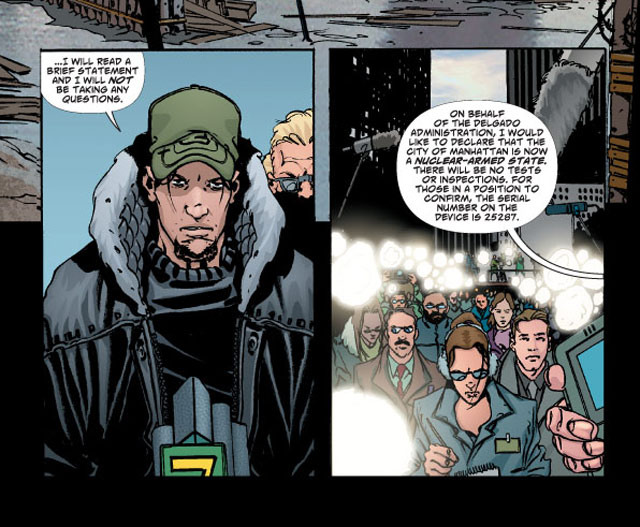 In DMZ, Matty seems to constantly struggle with being an outsider. Even after years of living in Manhattan, he is still seen as a "transplant" who doesn't understand the struggle of DMZ life by many there. A lot of people go through similar struggles when they move here and start calling themselves New Yorkers. Do his experiences in assimilation in any way parallel your own of being a city "transplant?" Maybe. Maybe subconsciously. I can't remember at which point I considered myself a New Yorker, officially. Maybe after I graduated college? One of Matty's defining characteristics is his endless struggle to "belong", and typically he is struggling too long and too hard and that's where the mistakes come in. He earned the respect of the locals pretty early in the series, but he clearly doesn't feel like he has. Maybe the true New Yorkers are the ones who don't talk about it, who just get on with life and aren't always trying to prove it to you.

In a similar vein, did you ever get any backlash for producing something that so loudly says "I know what New York is" when you weren't born here? I never have, at least not to my face. I am often asked, in interviews or at panel discussions, if I was born here and the worst thing that happens is people chuckle when they find out the place I'm from is Vermont. Right now I'm coming up on 20 years as a resident—if you can ignore the year spent in Hoboken and the year in San Francisco—and that seems to be enough in most people's eyes. Plus, the bulk of my writing is similarly New York-centric, so I've got a lot of cred built up.

Have you had any experiences living here that have directly influenced any of the plots in the book? Not the plots. I have a 9/11 story that feels more and more tired each time I tell it, but it was an important factor in my thinking up the book. I was stuck in Bushwick on that day and the days that followed, but when the trains started running I took the J in and somehow was allowed to get off on Delancey, which at the time was still below the security cordon they had established on 14th Street, or Houston, I forget. Point being it was closed off and the burning smell in the air and the number of military vehicles on the streets was such a remarkable break from reality that I've never forgotten it. One thing I constantly struggle with, as a 20-year resident, is taking the city for granted.

What else are you working on right now? In addition to DMZ there is NORTHLANDERS, my big Viking series, mixing a few genres into that time period, including crime, police procedurals, coming-of-age stories and survival horror. There's DEMO, my indie look at people with superpowers, DV8, a much more straight-up superhero book, and soon the second volume of THE NEW YORK FOUR, a Young Adult book about college in the city.

Got an "only in New York" story you'd like to share? My best times in the city have been the quiet, uneventful ones. A rooftop party that goes until the sun comes up, taking my DMZ artist and resident of Italy on the Circle Line for the first time, walking the length of Riverside Park, following a college friend into the subway tunnels, things like that. But when I try to impress people from out of town, I usually talk about eating lunch at Kelley & Ping one time years back and seeing Yoko Ono and Sean Lennon at another table. My best celebrity sighting by far.

#brian wood
#comic
#dmz
#graphic novel
Do you know the scoop? Send us a Tip