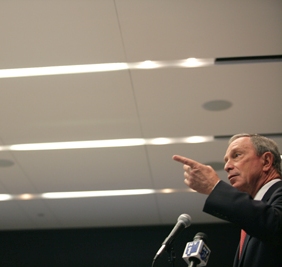 Given that news that Mayor Bloomberg had heart surgery before he was mayor was slipped into a Newsweek article, the Post suggests Mayor Mike was behind the leak. Strategists say that candidates rather have information out there in the open, versus than it coming out to bite candidate later. Republican strategist Dan Schnur told the Post, "This is the sort of thing Fred Thompson did" (Thompson announced his non-Hodgkin's lymphona - which is in emission - in April).

The NY Times expands on the idea of knowing all about Mayor Bloomberg. Even though he's been known to be secretive about pretty much everything else (like where he is on weekends), he's more open about his health - he takes a baby aspirin every day!

The Daily News says that a NJ man received a call from a polling company asking questions something like "Would you support Bloomberg running for the White House as an independent?" and "Would you support his candidacy if he pledged to spend $1 billion of his own money on the campaign?" The NJ man happened to be Daily News copy chief Philip Cornell, who said the automated poll did not say who was the sponsor but it really seemed like it was a Bloomberg poll. Guh, we know how we feel about $1 billion being put to a presidential campaign, but we want to know what you think:

And Crain's has video of Mayor Bloomberg from its breakfast forum earlier this week; watch and learn what the Mayor thinks about congestion pricing, education, and more.