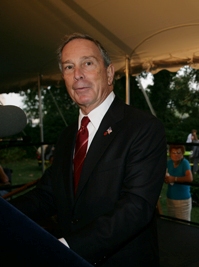 Mayor Bloomberg spoke out about the various lawsuits alleging that his company, Bloomberg LP, discriminates against women. He believes that he was personally named in one of lawsuits "because I’m so visible, that obviously I’m a target." He added, "We think there's no substance to it whatsoever and the company will vigorously defend it and that's that.

The Mayor has things more interesting by seemingly equivocating on his role at Bloomberg LP. After last week's lawsuit from the Equal Employment Opportunity Commission was filed, he said he didn't know anything about the lawsuit, "You'll have to talk to Bloomberg L.P. I haven't worked there, as you know, in an awful long time." Yesterday, he admitted that he was told about the EEOC suit and that his company would "vigorously" defend itself.

When this week's lawsuit contended that the mayor is involved in discussions with the chief executive about female executives' "disparate treatment," he changed his stance about his role at the company somewhat by saying, "I know what’s going on – any major decisions, I’m the major stockholder in the company. And the Conflicts of Interest board says I have a perfect right to have whatever rights a major stockholder would have. Nobody makes a major decision in terms of product changes or things of that nature. I certainly don’t get involved in the day-to-day stuff of personnel or anything else like that.” Bloomberg owns 68% of Bloomberg LP.

Douglas Muzzio, political science professor at Baruch College, told the Post, "Telling you what he [initially] told you comes as close to a lie as I can think of."