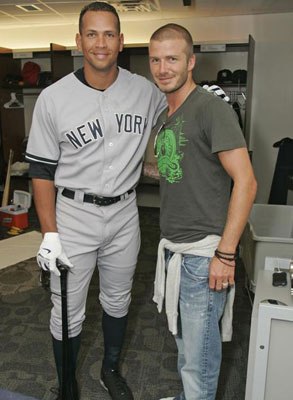 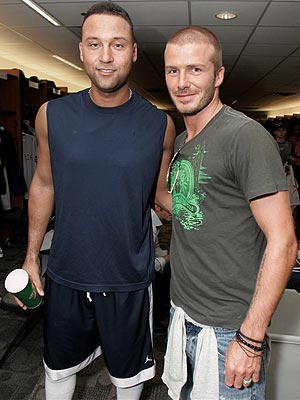 Major League Baseball really wants the public to get excited for the post-season, so it has created an Actober promotion, which has the slogan "You're a fan. Act like one!"

Actober, which has been up since the All-Star game, is mainly a contest to encourage fans to "create and submit the best original video that reenacts a famous Major League Baseball postseason moment" and fans will vote on their favorite. The three winners will receive tickets to this year's World Series. Some thoughts on how stupid this is at Sacs in the City.

Which brings us to soccer superstar David Beckham. Another part of Actober involves celebrities showing how much they love baseball. Since Posh Spice got to throw the ceremonial first pitch before a Dodgers-Mets game (she's now a HUGE Dodgers fan), we imagine that Beckham demanded photo ops with Alex Rodriguez and Derek Jeter. Too bad A-Rod and Jeter hate each other, or else they could have made a Beckham sandwich!