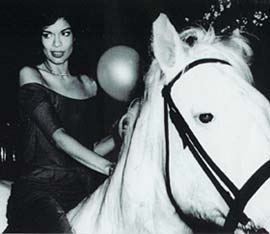 Bianca Jagger's attempt to get her $4,600/month rent-stabilized Upper East Side apartment back failed at the Court of Appeals today. The court upheld her eviction from 530 Park Avenue, citing her status as a tourist with a B-2 visa and the fact that residents of rent-stabilized apartments must use them as their primary residences.

Judge Robert S. Smith wrote in the decision (PDF), "We conclude that, absent some unusual circumstance, a primary residence in New York and a B-2 visa are logically incompatible." You've come a long way from Studio 54, Bianca.

Jagger's contretemps with her landlord, Katz Park Avenue, began when she sued her landlord for $20 million and withheld rent starting in 2003 (the rent has been put in escrow). Katz retaliated, suing and then evicting her from the apartment using the visa/primary residence argument. In the appeal, Jagger's lawyer tried to argue his client was a "snowbird"--someone who spends winters away but returns--which apparently didn't fly, nor did his opinion that "primary residence is a term of art."

Curbed suggests that Jagger's daughter Jade toss in a home.

#530 Park Avenue
#Bianca Jagger
#court of appeals
#eviction
#rent stabilized apartment
Do you know the scoop? Comment below or Send us a Tip