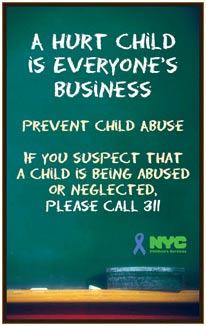 A 7-week-old baby who has been beaten since he was just 2 weeks old is now brain dead at Elmhurst Hospital, after his mother admitted to beating her son and then dropping him on his head. And the Daily News reports that the Administration for Children's Services had visited mother Kiana Perez just two days before.

Perez, an ex-junkie whose first child was taken away by ACS but was allowed to keep baby Pablo because she had tested clean for three months, brought the baby to the hospital and claimed he had stopped breathing. But doctors found a number of injuries, including broken bones, and called the police. From the News:

The mom told authorities Pablo was just 2 weeks old when she grabbed him with such force she broke eight of his ribs, sources said. A month later, he still had fingernail imprints on his chest.

Paez didn't take Pablo to the hospital, so he had to endure the pain while the ribs healed.

But his mom didn't want to hear him cry, and one day as he wailed, she angrily hurled him across the room onto a bed, breaking his leg, she told cops. Again, Paez sought no help for the child, sources said.

An ACS caseworker had visited on Tuesday, and the News' law enforcement source says, "The ACS workers were shocked when they found out what happened. They were crying...But good Lord, how do you miss a baby with a broken leg and broken ribs? It's mind-blowing."

Perez was charged with attempted murder. ACS has undergone a number of changes after Nixzmary Brown's and other children's deaths occurred while their parents were under ACS investigation, and recently launched a campaign to recruit child protection specialists. And April is Child Abuse Prevention Month.

#ACS
#Administration for Children's Services
#attempted murder
#child abuse
#queens
Do you know the scoop? Comment below or Send us a Tip