A Visit To Jalisco, Where Blue Agave Transforms Into Tequila At the end of March I found myself gunning an ATV at breakneck speeds through thick clouds of red dust arising from the vast blue agave fields outside Arandas, a sleepy town in Los Altos, the highlands of the northwestern Mexican state of Jalisco. This state is where most of the world's tequila originates, including Olmeca Altos, which owns the fields I was tearing through on this dazzling sunny day.

I'd flown down there a day earlier on a press trip arranged by Pernod Ricard, a huge French conglomerate that owns Olmeca and a wide array of liquor companies, including Absolut, Jameson, and Chivas Regal. They hadn't made me sign a release before hopping on the ATV, and if I flew off into an agave plant and broke a leg, I was in for a big payday. 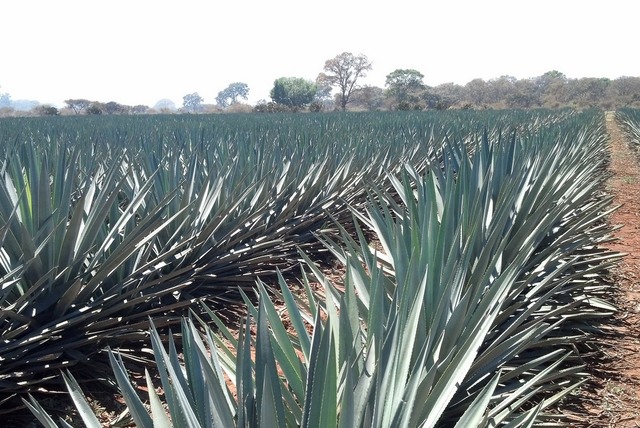 This was my first time in Mexico, and the brutal assignment involved drinking my weight in tequila and, as a corollary, learning about how it's made, which isn't something I'd ever given much thought. In my experience, tequila was always briskly pounded as a shot or obscured in a margarita. But in addition to getting ejected from a bar by heavily armed Mexican police and developing a nasty sunburn that reduced me to a cloud of flaking skin for a week, the trip did give me a new appreciation for tequila as something more than just a catalyst for regrettable late night decisions. 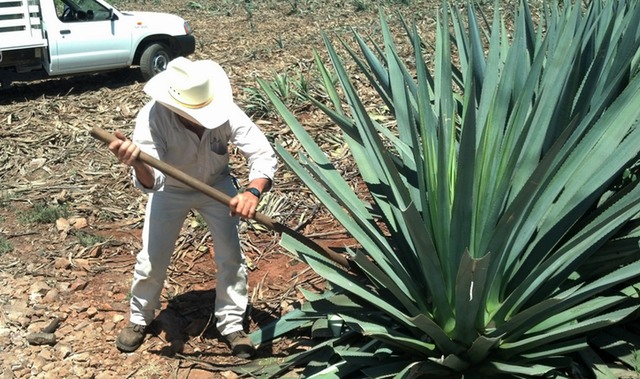 Good tequila takes many years and intensive labor to get it from the relentless Mexican heat and into your frosty margarita. The agave plants that comprise tequila's main ingredient (and, when done right, its only ingredient) need at least seven years to grow to full maturity. They're hardy plants, requiring no irrigation, but the harvesting is incredibly strenuous work, as I learned when our guide halted the ATV caravan for a demonstration in the fields. As it has been for centuries, the agave is extricated by hand by skilled men called jimadores, who utilize sharp shovel-like tools called coas to carve away the agave leaves from the piñas in the center. In the highlands, these piñas, which vaguely resemble pineapples, can grow big as watermelons, and one kilo can yield roughly a case of tequila.

Because of the plants' complex shape and structure, it's hard to see how a threshing machine will ever replace the jimadores, but I'm sure they'll find a way sooner or later. Each man—and the jimadores are exclusively men—carves up at least 160 agave plants a day; at the Olmeca distillery they're paid about $200 a week. At one point during the demonstration the jimador handed me the coa so I could give it a try, and I found slicing the leaves from the piña to be strenuous but very gratifying work. I could see myself enjoying the work for at least twenty minutes before collapsing from a pulmonary embolism and dying in a ditch, just another naive gringo with agave in his eyes who thought he could make it as a jimador. 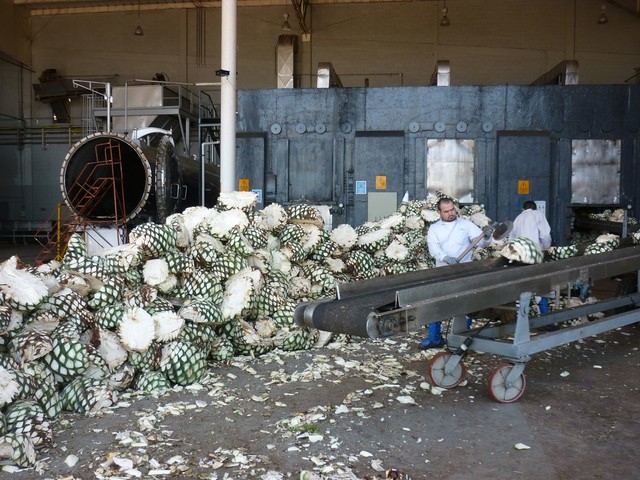 After all the sharp leaves are cleaved off, the piñas are loaded onto trucks and driven to the distillery, where they're slowly baked in brick ovens. At this point the process varies significantly from brand to brand. Like champagne, tequila is a Controlled Origin of Appellation spirit, meaning it can only be produced in specific regions of Mexico, mainly Jalisco, where you'll find the actual town of Tequila. The Mexican government requires a company selling anything called tequila to derive the spirit's sugar from at least 51% agave, but at that point it can get dicey. Low-end Jose Cuervo contains just 51% agave and makes up the remaining percentage with corn syrup and other crap. The impurity of cheap, mass-marketed tequila like this probably accounts for the spirit's association with brutal hangovers and general idiocy.

Connoisseurs argue that 100% agave tequila is the only type of tequila worth welcoming into the temple of your body, and they're probably right. The market for this pure stuff is increasing, and in addition to Olmeca Altos, the iron-rich soil of the Los Altos region also yields top shelf 100% agave tequila like Don Julio and Patron, which is typically the most expensive. 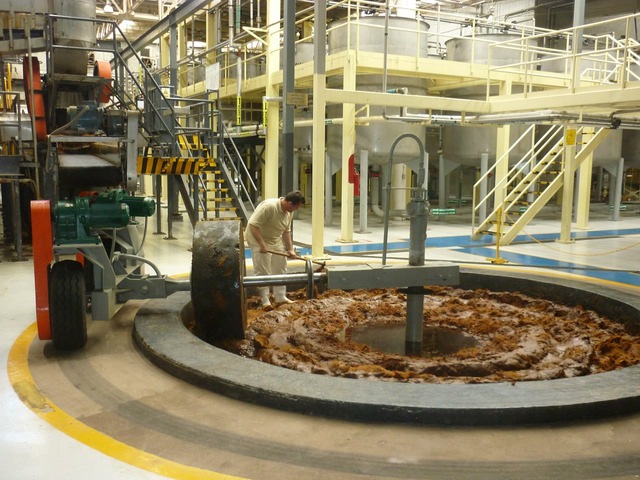 Like Patron, the Olmeca Altos distillery uses a traditional Tahona, or stone wheel, to grind down the piñas into agave wort after they emerge from the oven. (The distillery processes 60-80 tons of piñas a day.) But not all of the piñas are ground down by the Tahona—a large portion is also macerated by machine. 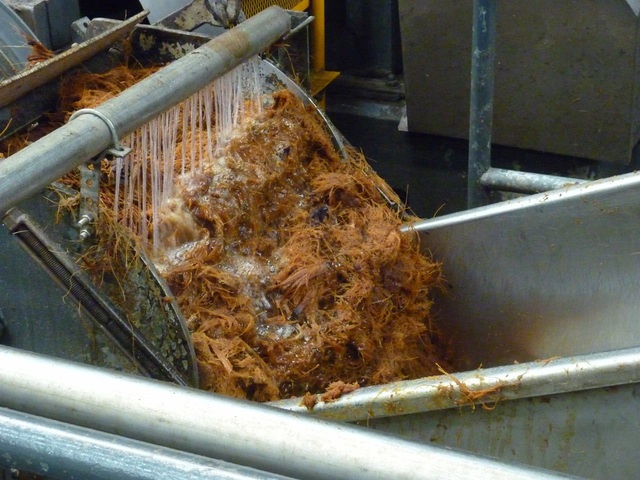 Olmeca Altos's master distiller, Jesús Hernández, took us on a tour of the distillery after the ATV ride, and he would not divulge the ratio of Tahona-ground piñas to machine-macerated. But I can confirm that the atavistic Tahona grinding makes a difference, because their small batch "Tahona" tequila, made with 100% Tahona-crushed agave, is by far the smoothest and richest tequila I've ever tasted. Unfortunately it's not sold in the U.S., which is really a shame because it's phenomenal. 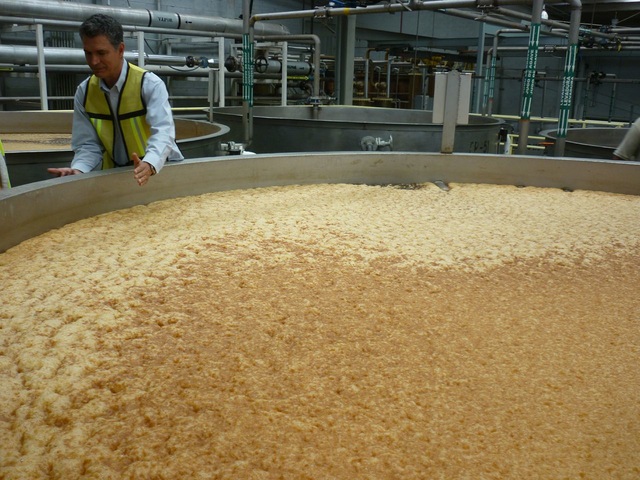 After maceration, extracted agave juice is fermented in huge steel vats for twelve hours (the unused pulp fiber is composted and used to fertilize the fields) and double-distilled in big copper alembic stills. Serious men with test tubes diligently monitor the fermentation and distilling process, regularly sending results to the lab, and the whole operation has a Heisenbergian fastidiousness. 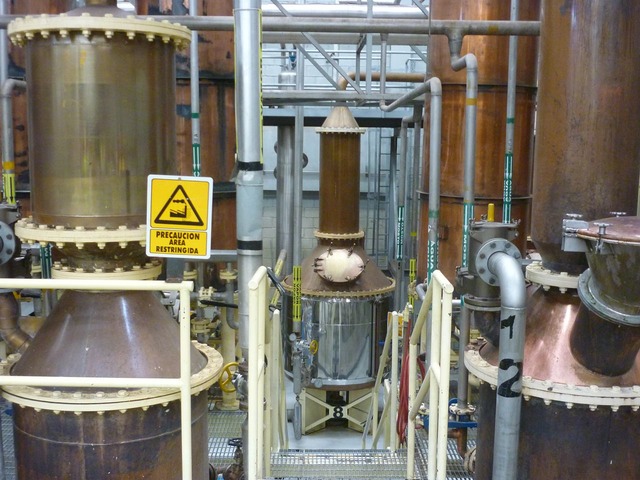 Throughout the distillery the odor of the agave pulp, which resembles funky sweet potato, is overpowering, and I was relieved when the tour finally wound its way to the massive aging warehouse, where thousands of barrels of tequila rested quietly. We were told we weren't allowed to take photos in the darkened barrel warehouse because of fear that flash photography might somehow spark a catastrophic tequila conflagration. The warning seemed ludicrous, but at the same time nobody was willing to test its validity.

After distillation, the tequila can be immediately bottled and sold as Blanco, or aged in oak barrels and sold as Reposado, a smooth, caramel-colored spirit that's often savored neat, like scotch. The taste and quality varies here depending on how long it's aged; Mexican regulations only require Reposado to be aged at least two months. If the tequila is aged more than a year, it can be sold as Anejo (at a higher price point). At the Olmeca Altos distillery, the Reposado is aged between six to eight months and comes out strong and complex, with a hint of caramel and long finish.

Later that night, at a deserted old man bar in Arandas, the other journalists and I conducted an extensive examination of the Anejo and Reposado, debating the different flavor profiles and comparing notes (all of which have been lost—or, some say, stolen) until the police arrived to shut the place down. It was midnight, and we got the sense that the authorities don't take to kindly to investigative journalistic alcohol research in their devout, family-oriented town. Were they hiding something?

I tried to get to the bottom of it back at the hotel bar, but the alcohol content of the distilled agave made further research challenging. Also, the hotel bar was closed, and the people at the front desk pretended not to speak English. Clearly, another fact-finding mission is required, possibly to the Patron distillery.

Arandas is about a two hour drive from Guadalajara, which is the second largest city in Mexico and a major business center. There's not much reason to visit Arandas unless you're there to immerse yourself in the tequila (there are a number of tours that can give you a first-hand look inside the distilleries) but the central courtyard outside the magnificent San Jose Obrero church is bordered by a wide variety of vendors hawking all sorts of local flavor, and the church itself has one of the biggest bells in North America, so you can finally cross that off your bucket list.

Guadalajara has considerable history to soak up, but a couple of days there are sufficient. (If you can, stay in the ultra-hip boutique Hotel Demetria, located in the artsy Lafayette district.) The city, which is beautifully populated by purple Jacaranda trees, does not want for excellent restaurants, and I highly recommend I Latina, a festive hotspot with fantastic shrimp tacos that come with jicama, and a succulent, tender black cod served with fried asparagus, which is probably the best thing I ate in Mexico. (The owners also operate the San Francisco restaurant Lolo.)

As in Arandas, the main cathedral here, built in the early 17th century, is well-worth marveling at, as well as the 19th-century Hospicio Cabañas, a World Heritage site with spectacular architecture and stunning frescoes by José Clemente Orozco, including one of his most famous works, The Man of Fire. To pick up souvenirs, take a spin through the artsy-craftsy neighboring old town of Tlaquepaque, where a long pedestrian plaza (El Parián) is lined with myriad boutiques and art galleries, as well as a bounteous indoors fresh produce market. That's where I spotted this man doing his thing: 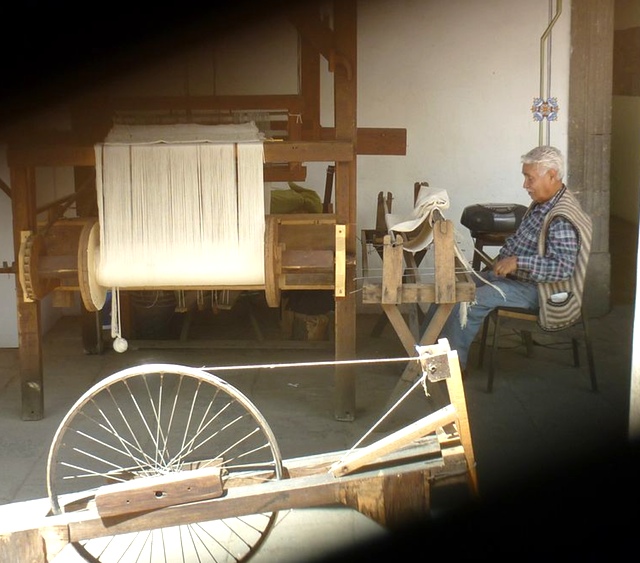 Guadalajara is about an hour from Mexico's largest freshwater lake, the scenic Lake Chapala, but it isn't close to the ocean. Nevertheless, I was determined to take a brief, two day jaunt over to Puerto Vallarta, a renowned beach resort town on the Pacific Ocean that's about a six hour drive. It's not such a crazy idea; you can get a round trip bus ticket on ETN for about $80—this allows you to pick your seat in advance, and all of them recline almost completely, so you can easily sleep through most of the trip. 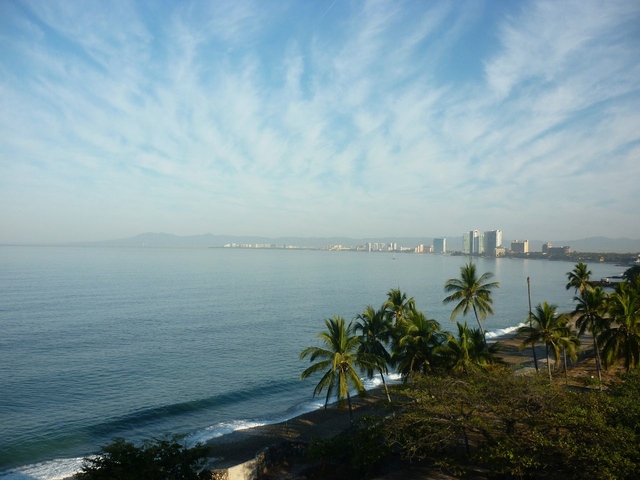 As you can see, Puerto Vallarta is gorgeous, with seemingly endless beaches and innumerable hotels and resorts to choose from, depending on what you're going for. But it's very much a tourist town, with all the raucous partying and commercial crassness that goes along with it. The nightlife there is bumping. If you're seeking tranquility, you may want to shell out for one of the more secluded resorts, like the raved-about Imanta resort, located on 250 acres of jungle on a private soft sand beach. If you're staying in town, make time for dinner at Barcelona, an outdoor tapas restaurant perched on a hill with marvelous views of Bahía de Banderas. Go for the sunset, stay for the drone. 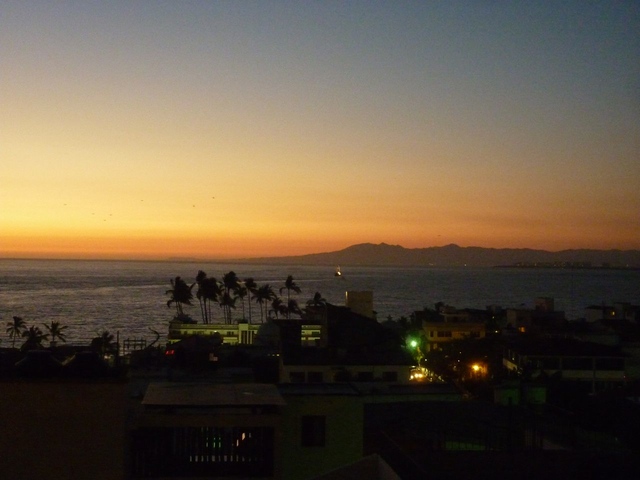 #gothamist getaways
#olmeca altos
#tequila
#original
Do you know the scoop? Comment below or Send us a Tip 6 Reasons To Take The Train To Montreal
Last month I took the train and found some notable sights, sounds, and prehistoric monsters.
Gothamist Getaways
Read More In:
Back To Top