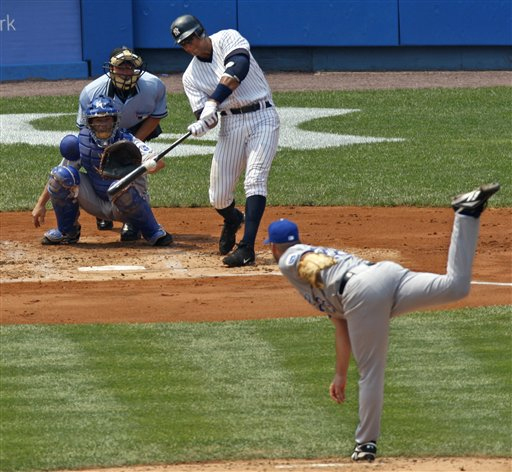 Alex Rodriguez settled anticipations of his 500th career home run early in the Yankees game against the Kansas City Royals this afternoon. With Derek Jeter and Bobby Abreu on second and first base, A-Rod swung at the first pitch Kyle Davies served him and knocked it over the left field fence. It was Rodriguez's 36th homer of the season with 108 RBIs, and the magic number 500 has the third basemen on the verge of cracking the top 20 of all-time home run hitters. He only needs another four A-bombs to tie Eddie Murray at #21 (504) and five homers to tie Frank Thomas at #20 (505).

In the bottom of the 4th inning, the Yanks lead the Royals 6-2. A-Rod has so far followed his home run with a walk and a single.